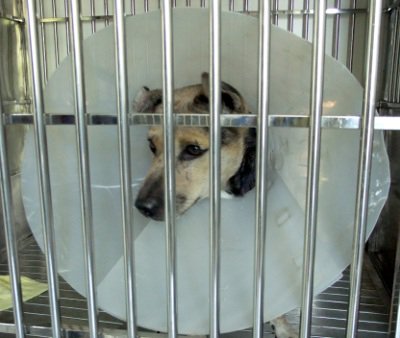 PHUKET: A team of Phuket emergency response officers are calling for donations to help a stray dog that has been inflicted with an eight-inch wound to its stomach.

Officers at the Patong Municipality Department of Disaster Prevention and Mitigation (DDPM) first noticed the dog, now named “Nin”, meaning black, when he wandered into the area near their offices last Thursday.

“We took him to a veterinarian at the Rattanathebet Phuket Hospital [in Wichit] on Thursday night,” explained DDPM-Patong officer Sampawat Wannasangkam.

“I asked around to see if anyone knew what happened to the dog, and I was told that he was attacked by a drunk foreigner,” he added.

Contributions from staff at DDPM-Patong and other donors already tally about 9,000 baht, said Mr Sampawat, but it’s not enough to pay for the veterinarian fees already incurred and the medication Nin needs to stop from developing a deep infection, which may have fatal consequences.

Ms Aom, a veterinarian at the Rattanathebet pet clinic, told the Phuket Gazette this morning, “Nin is very nervous and scared of people. He is probably afraid of being attacked or being kept in the kennel. He also does not eat by himself. We have to hand feed him. It seems like he does not like the dry dog food we give him.”

“We operated to close the wound, but he is a very nervous dog. And because he moves so much the wound is not closing as well as it should. The skin is not holding together and there is a lot of inflammation. Worse, the gash is about two to three inches wide now,” she said.

Ms Aom explained that Nin’s wound needs to be cleaned twice a day, an act that takes six people to perform.

She added that the wound was consistent with a cut inflicted by a bladed instrument.

“We gave him anti-anxiety medication to calm him down, but what I am afraid of is that he is likely to develop a deep infection in his abdominal cavity,” she said.

“We are aware that he does not have an owner, and we are trying to reduce the medical fees as much as we can. As of yesterday, the medical costs totaled more than 15,000 baht,” she said.

The costs so far are only half of what the normal fee would be, Ms Aom explained, as the clinic was calculating only the medical products used to treat Nin, and not the services provided.

“If anyone is interested in providing any assistance, even just food, as he does not seem to like the dry food we have here, please feel free to contact us at 076-213464,” she added.