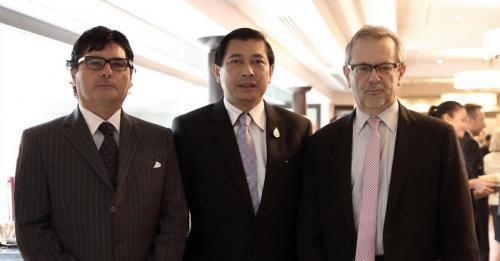 PHUKET: Dr Francesco Pensato has been proclaimed the Honorary Consul of Italy for Phuket and the rest of South Thailand.

Dr Pensato, a lifelong patron of the arts and himself a composer of music, is also a director of the Thai-Italian Chamber of Commerce (TICC, website here) and chairman of TICC’s Phuket and Southern Region of Thailand Committee.

Nominated for the position of honorary consul in February 2012, Dr Pensato’s credentials were formally accepted by the Royal Thai Government in May this year.

Italian Ambassador to Thailand Michelangelo Pipan introduced Dr Pensato as the new Italian Honorary Consul for Phuket to Phuket Governor Maitri Inthusut and fellow ambassadors of European countries who attended the conference in Phuket on June 14 this year (story here).

At that conference, the European ambassadors called on Phuket authorities to ramp up measures against scams operating in Phuket; taxi and tuk-tuk drivers overcharging tourists; unscrupulous motorbike and jet-ski rental agents; and sea pollution, as well as improve beach and water safety and traffic congestion on the island.

More than 200,000 tourists from Italy visited Thailand during 2012, according to the Ministry of Tourism and Sports.

“More than half of those visited Phuket,” Dr Pensato said.

Dr Pensato can be contacted through the Honorary Consulate of Italy at: