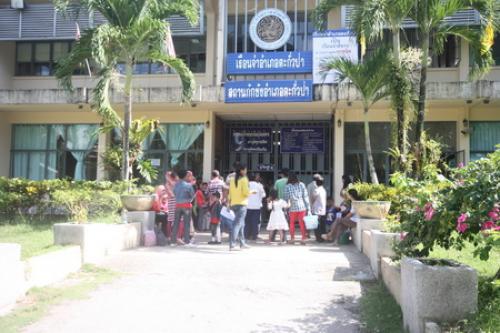 PHUKET: The Rohingya man charged by police with holding a 25-year-old Rohingya woman captive and raping her repeatedly over three days has been handed over to the Takuapa Court.

Kuraburi Police relinquished custody of Korlimula Ramahatu yesterday after he conducted a re-enactment of the alleged crimes on Tuesday.

“He claimed he was very religious. He said he would not do such a thing,” he added.

An attempt to conduct the re-enactment on Monday was aborted after the woman and her two children began berating Mr Ramahatu, Col Chalerm explained.

The anger among the mother and her daughters started when they saw Mr Ramahatu at Kuraburi Police Station, but boiled over when they were about to board a boat to Koh Ra Island, off Koh Phra Thong.

“They started to attack him, throwing bottles of water and hitting him with their shoes,” Col Chalerm said.

The officers decided to bring Mr Ramahatu back to Kuraburi Police Station.

“We were afraid they would fight on the boat. With only two police officers, including myself, present, we would not be able to control the situation,” Col Chalerm explained.

With Mr Ramahatu removed, the mother and her daughters were taken to the house on Koh Ra where the mother identified the location where she was allegedly raped on three consecutive nights.

“After that, we went to the house where they were taken after being picked up from the shelter by Mr Ramahatu,” Col Chalerm said.

On Tuesday, it was Mr Ramahatu’s turn to retrace his alleged steps during the trafficking and alleged rape ordeal.

“We took him to the shelter where he picked up the woman and her daughters, then we headed to the house, about 10 kilometers away,” said Col Chalerm.

The house belongs to Mr Ramahatu’s relative, he said.

“He used to live there when he was working for Sgt Maj Weerayuth Fuangfu as a palm plantation laborer. Sgt Weerayuth is the person who allegedly picked up the other two Rohingya women from the shelter,” he explained.

The investigation into the human trafficking and rape ordeal is likely to take at least a month to conclude, Col Chalerm noted.

“We need to question the two daughters. That will take time because a social worker, psychologist and the public prosecutor must be present when we question them,” Col Chalerm explained.

“I believe it will take at least a month before we can hand the case over to the Public Prosecutor,” he said.

Mr Ramahatu is now being detained at Takuapa District Prison.

“He has a right to request bail. Police denied him that privilege, but we no longer have authority over this. It is now up to the court whether or not to allow him to post bail,” Col Chalerm explained.

“He surrendered himself to police and acknowledged the charges against him; then he was released,” said Col Chalerm.

“However, Sgt Weerayuth must come to the police anytime he is called,” he added.