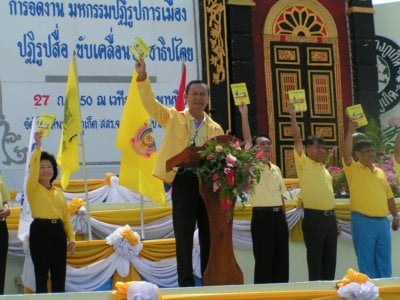 SAPHAN HIN: More than 1,000 people gathered at Saphan Hin this morning to promote Phuket’s participation in the forthcoming national referendum on the newly-drafted constitution, which will take place August 19.

Phuket officials were joined by members of the public and representatives from each Tambon Administration Organization (OrBorTor) wearing yellow T-shirts and carrying banners and flags in support of the referendum.

Phuket Governor Niran Kalayanamit led the rally as each person showed off a copy of the newly-drafted constitution, which the government has posted to all Thai citizens in a 194-page booklet.

Phuket’s residents have already received their copies of the draft charter, while Thailand Post is confident that it can deliver 19.7 million copies of the booklet to voters around the country by the end of the month.