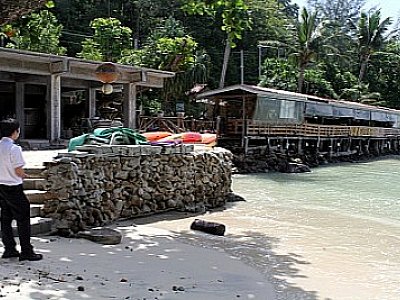 Although the officers, led by Phuket Marine Office chief Phuripat Theerakulpisut, could not determine the “owner” of the buildings, the workers were ordered to demolish the structures within 30 days.

The buildings under construction included a restaurant, guest rooms and a beachfront rock wall to prevent waves from reaching the structures.

Patong Police officers who joined the raid charged the nine workers for illegal construction in a public area.

“When we arrived here, we found the Burmese workers building on 900 square meters of land, including the beach itself,” he said.

Mr Phuripat said the raid was the result of complaints from people he did not identify.

He also explained that any construction on public land without permission from officials was deemed illegal under Section 117 of the Navigation in Thai Waters Act B.E. 2546.

“Therefore, Marine Office in Phuket was ordered to demolish all constriction that trespasses on public areas. Everything has to be removed within 30 days.

“If the contractor fails to remove all of the structures within the stipulated period, we will press further charges,” Mr Phuripat warned.