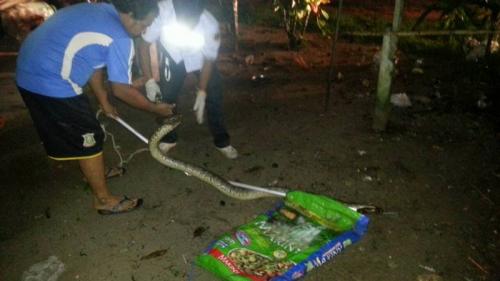 “I was asleep in the house when I was awoken by the sound of a chicken,” said the owner of the fowl, Pairoj Denmalai.

“I came outside to find a large python strangling one of my chickens, and immediately contacted Kusoldharm Foundation rescue workers,” he said.

It took rescue workers 30 minutes to wrestle the reptile away from the chicken and into a bag.

By the time the snake was sacked, the chicken was dead.

After that, the python was headed for greener pastures.

“We’ll release it in the jungle,” a Kusoldharm Rescue foundation worker told the Phuket Gazette.

PHUKET VIDEO REPORT: Infamous Black Hole of Patong may not be fixed for weeks