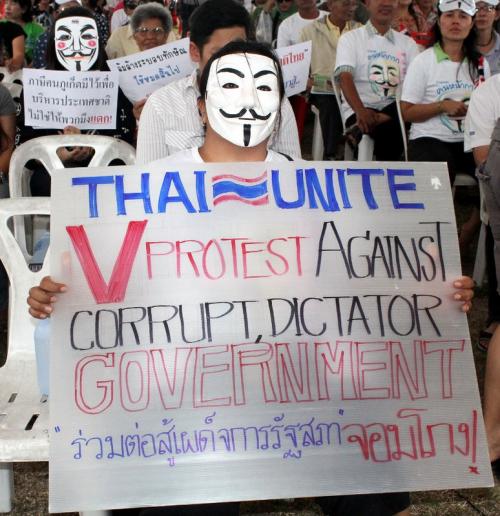 The rally in Phuket was held in concert with other “V for Thailand” protests in at least 22 provinces, as well as in Bangkok (story here).

While several hundred protesters found seats in the covered area provided, many others braved the elements outside.

Many popular figures were on stage to present their opinions.

“An ICEC is very important to Phuket. The province earns a lot of money for Thailand and helps a lot of Thais make a living. Many people from across the country come to Phuket to work,” said well-known anti-Pheu Thai government and anti-Thaksin spokesperson Kaewsan Atipo.

“Deputy PM Plodprasop made a comment that ‘he was not in the mood’ to build an ICEC in Phuket. I have no idea what he was thinking… Not building an ICEC in Phuket would cost Thailand a lot of revenue,” he said.

Jittakorn Bushaba, who joined V-Phuket rally two weeks ago, urged Phuket people to maintain pressure on the government in order to have Deputy Prime Minister Plodprasop removed from office.

“We must go on protesting so they can see the power of the Phuket people. Nothing seems to have been done since we filed the complaint [two weeks ago],” he said.

“We must maintain our pressure on the government,” Mr Jittakorn said.