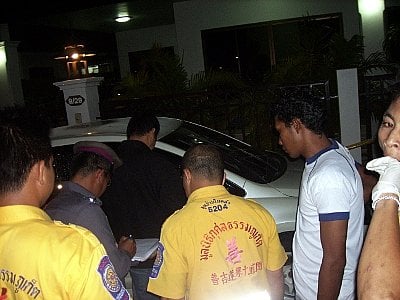 PHUKET: A well-known real estate dealer and her daughter were killed when their car was riddled with bullets by gunmen in Phuket Saturday evening.

A second daughter was seriously injured in the attack, which took place in the Yoojaroen Project 1 estate in village 8, Pa Khlok.

Police are hunting the killers and the mastermind behind the slaughter. They believe the motive was probably a dispute over a property deal.

Property broker Jeerati Nakmee, 41, and daughter Kiriyaporn Anutthato, 21, died at the scene after being hit by a hail of bullets.

Ananthira Anutthato, 15, was hit in the groin and arm and rushed to Thalang Hospital for emergency treatment.

Police said the family had been attacked by unknown assailants and had received death threats in the months leading up to the massacre.

Thalang Police Duty Officer Sarit Butnongsaeng was alerted to the attack about 8.30pm.

At the scene they found a white compact car peppered with bullet holes.

The bodies of the two dead women were in the front, while Miss Ananthira was sitting in the back.

Witnesses told police the attack was carried out by at least three men in a pick-up truck armed with shotguns and .357 magnums.

Mrs Jeerati had five bullet wounds to the chest. Police found a .38 caliber revolver by her left hand.

Mrs Kiriyaporn’s bloodied body was found in the driver’s seat. She had several bullet wounds to the head and back.

The car windows were riddled with bullet holes of various sizes. An examination showed some had come from bullets fired from inside the car.

Police found several bullet casings from a .357 caliber weapon and so-called ‘Thai pradit’ homemade weapons on the ground around the car. Inside the vehicle were several Chanote land title deeds, which police collected as evidence.

Police have established that about two months ago a gang of three or four young men arrived at Mrs Jeerati’s home in a black car. They inflicted serious damage on three cars belonging to the family that were parked outside.

The men forced their way into the home and attacked the three women, demanding they pay back several million baht or they would be killed.

Two or three days before the killings a man in a motorcycle helmet was seen driving round the family’s house several times.

While they believe the motive for the killings was a dispute over property, they have not ruled out bad debt to a money lender or other motives.