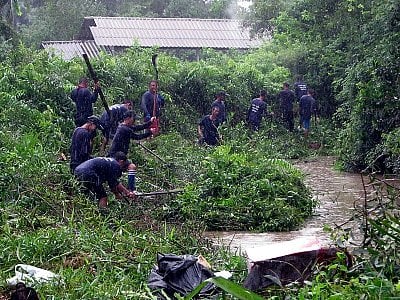 PHUKET: Inmates at Phuket Provincial Prison were dispatched to Thalang over the past two days to clear canals of overgrowth and to improve drainage in flood-affected areas of Pa Khlok.

Armed with sickles and under close observation by prison wardens, more than 30 inmates with ‘good behavior’ records took part in the operation, which helped ease the suffering of residents in flooded parts of Pa Khlok and Mai Khao.

Phuket Prison Director Rapin Nichanon said the project, dubbed “Mobilizing Prisoners to Solve Flood Problems and Ease Public Suffering”, was intended to make up for a shortfall in local workers willing to brave the rain and ford muddy, flood-swollen canals to cut back the overgrowth.

The inmates, dispatched following an emergency request by the Pa Khlok Tambon Administration Organization (OrBorTor), were divided into two units. The first chopped down growth along a five-kilometer stretch of Klong Bangrong, which flows into Ao Por.

The second team attacked offending vegetable matter along a four-kilometer stretch of a draining ditch along the Pa Khlok-Muang Mai Road.

Residents of both areas reported a considerable improvement in drainage.

There were no reports of prisoners using the outing to stage bids for freedom, or using the sickles to cut anything other than the overgrowth.