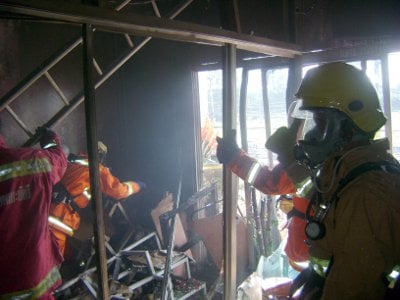 PHUKET: The cause of a fire in an uninhabited Phuket shop-house this morning remains unknown, with police saying it was not a short circuit.

No one was injured in the fire.

The blaze started at about 8:30am on the second floor of a two-storey shophouse in Thalang – about 100 meters from the Heroines’ Monument towards Pa Khlok.

The second floor – comprising a bedroom and a Buddhist shrine for the owner – was extensively damaged, while the Model Beauty Shop on the first floor suffered minor damage, mostly from the water sprayed to extinguish the fire.

Thalang Police duty officer Pramarn Yukkapun said that the fire appeared to have started on the second floor and may have been caused by an unattended lit candle.

The electrical wiring was inspected and found to be in working order, Capt Pramarn added.

However, Model Beauty owner Wiwattana Sidaluck, 28, who rents the townhouse to run her beauty salon, said that she didn’t light any candles.

She was out taking her child to a nearby school when the blaze started and said no one was in the shop-house at the time.

Srisoonthorn Tambon Administration Organization (OrBorTor) fire crews responded within minutes and had the fire extinguished within about 15 minutes.

Thalang Police officers and Kusoldharm Rescue Foundation workers were also at the scene.

“If we find [in our investigation] that the fire was a result of carelessness on behalf of the shop-owner, this will be a big problem for them,” Capt Pramarn warned.