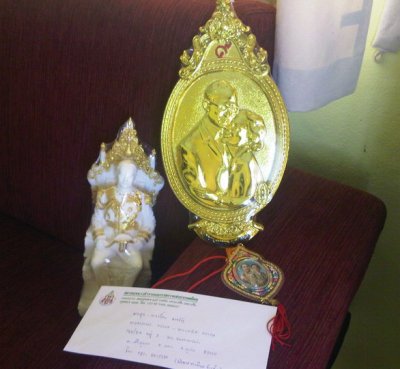 PHUKET: Phuket police are warning residents to beware of men approaching their homes calling for donations, for which, in return, donors receive souvenir plaques bearing images of His Majesty Bhumibol Adulyadej and the Queen Mother.

The warning comes after a group of about 10 men in a Nissan Navara arrived in a neighborhood near the Tha Reua Shrine late yesterday morning.

The men approached houses where women were home alone, or home with just their children, and pressured them into letting the men into their homes.

Janyaporn Morel, director of the Phuket Community Foundation (PCF) charity, today told the Gazette, “The men say they are from the Retired Army and Police Association [a genuine association] and ask for donations to provide prosthetic legs for their members.

“But all the time while they are talking, they are constantly looking around the house and asking personal details, such as whether you are married or live alone,” she said.

“If you want to make a donation, they say you must pay according to set packages starting from 4,000 baht to sponsor one bag of medical saline solution, to 7,000 baht for a pair of ‘short’ prosthetic legs.”

Suspicious of the high prices, after the men left Mrs Morel called the Retired Army and Police Association head office in Bangkok – the association has no branches in Phuket – who confirmed they had representatives in Phuket collecting donations.

However, Mrs Morel said she remained suspicious of whether the association was genuine in its cause as she had read many complaints about it from people in other provinces.

The Gazette called the association today, but all calls were unanswered. The association does not have a website detailing its collection drives.

Thalang Deputy Superintendent Lt Col Jirasak Siamsak told the Gazette, “I have heard of this association before, but so far we have not received any formal complaints, so there is nothing we can do about them.

“Although it sounds like their behavior is not commendable, they are not committing fraud,” he added.

“This association might be a real, but their behavior is not polite. They should not pressure people, especially women home alone, to pay such high prices for donations.

“Some people think that such a souvenir, considering the images of the royalty involved, should be expensive,” he added.

Lt Col Jirasak urged people to be careful of such tactics, as in the past some people who visited homes seeking donations came back later to rob the houses.

“If you are not sure if they are genuine, then do not let them into your homes,” he said.

“There are many other ways to make merit. If people really want to make a donation to this association, then they should contact the head office,” he added.

Phuket’s PIMEX on track for another record year

All change at FC Phuket