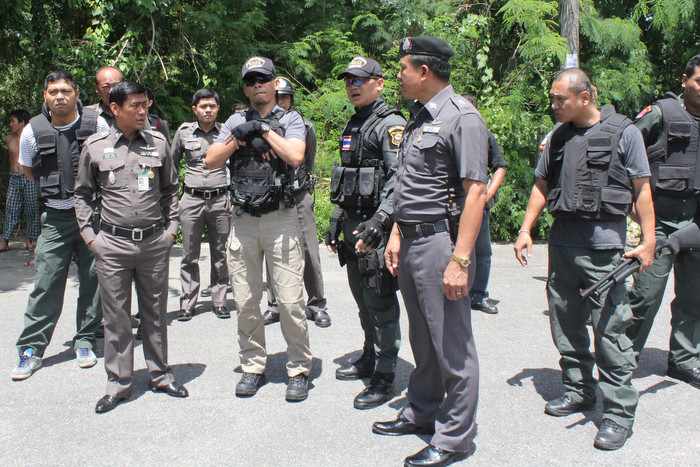 PHUKET: Police tasered and fired rubber bullets on a hysterical Phuket man who was threatening to attack his family and neighbors with a hatchet this morning.

“Police officers on patrol on motorbikes were the first to the scene, in Soi Hutchananiwet [in Rassada], near the Phuket Provincial Administrative Organization [PPAO] Hospital,” Phuket City Police Superintendent Sermphan Sirikong told the Phuket Gazette.

“They tried to talk 47-year-old Pramote Deechosorn down, but then he got out of his car and ran after an officer, waving his hatchet at him.

“While a few officers were trying to control Mr Pramote, another one managed to remove the keys from the car and lock all the doors.”

When Mr Pramote ran back to his car and realized that it was locked, he threw the hatchet down and started beating the car with his fists.

Not long after, reinforcements arrived to help subdue Mr Pramote and prevent him from hurting himself or anyone else, Col Sermphan said.

“We knew we weren’t going to be able to calm him down, so we stunned him with a taser,” said Col Sermphan. “However, the shock wasn’t enough, so we had to take him down with rubber bullets.”

Mr Pramote was taken to the PPAO Hospital.

“We were told that Mr Pramote is a boat captain who returns home a few times a month. His brother-in-law told officers that Mr Pramote came home from work last night, and was very nervous,” said Col Sermphan.

“He said that Mr Pramote was convinced that someone was following him.”

Mr Pramote’s brother-in-law said that family members were not concerned, so they didn’t immediately react to the situation.

“Then, early this morning, Mr Pramote went for a drive around the neighborhood. His brother-in-law said he finally went outside to ask Mr Pramote what was wrong. That was when Mr Pramote started threatening him and other concerned neighbors with the hatchet,” Col Sermphan explained.

Police have yet to press any charges against Mr Pramote.

“We did not charge him because no one was hurt and he did not damage any property, other than his own car,” said Col Sermphan.

“We are waiting for doctors to evaluate his mental state and try to determine the reason for his paranoid outburst.”