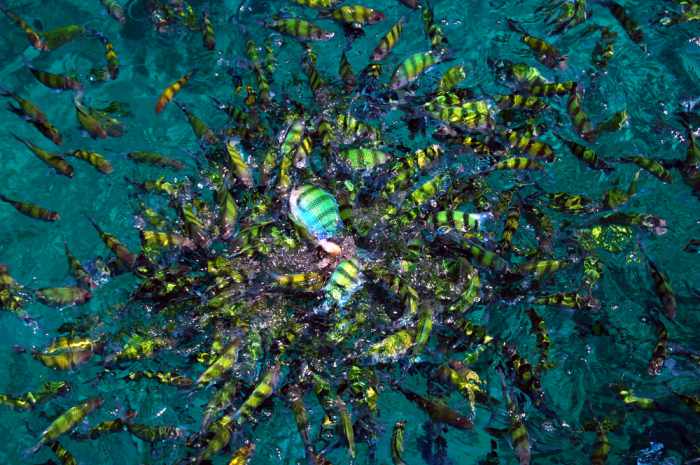 PHUKET: Thousands of small sergeant-major fish frantically banqueting on sopping, wet slices of bread floating on the ocean surface is not an uncommon sight for tourists taking boat trips from Phuket to discover the wonders of the Andaman Sea.

Everyday, hundreds of tour boats bring thousands of tourists to islands along the Andaman coast. Many of the boat operators, perhaps even the majority, feed the fish.

For many visitors, there is a thrill in watching a feeding frenzy of fish. However, there are consequences. It’s the reefs that suffer and as a result, the sustainability of the businesses profiting from them.

“Feeding fish is not ecologically benign. Although the mass of fish swimming in front of your mask as you feed them is very exciting and visually stunning, it has a number of negative consequences,” said environmental scientist Dr Wayne Phillips of Mahidol University.

“Each organism on the reef has a specific role to play. If you remove that organism or [modify] the role it plays – you upset the dynamic balance of the reef. This balance is maintained by the complex interactions within and between the different species on the reef.”

Sliced bread is of course not an element of the reef environment or part of a fish’s natural diet.
Fish feeding on sliced bread, such as sergeant-majors, are typically grazers that eat algae. However, when presented with an easy, readily available alternative food source, they change their normal foraging behavior to exploit the new situation.

“This means that if the fish consume the offered bread or rice, they will not consume the algae. Corals grow relatively slowly [depending on the species] and can become overgrown by the faster growing algae. Reef areas that experience heavy tourism are also likely to experience increased nutrient concentrations, which allow the algae to flourish,” said Dr Phillips.

“In normal situations, the fish will keep this enhanced algal growth in check, allowing the corals to grow and not become overgrown by algae. But if the fish are too sated on bread or rice, they will not consume the algae, the algae will overgrow the corals and the reef will change from a coral-dominated to an algae-dominated reef. Such reefs function differently from coral-dominated reefs and support fewer species. They are also generally less attractive.”

A quick Google search for day-trips to the islands accessible from Phuket, such as the Similans, Phi Phi, Coral Island, Racha Yai and Noi, reveals that one of the major selling points of the program are the multicolored coral reefs and the vast quantity of marine life that comes with the ecosystem.

Yet, the tour operators who are whisking tourists off to see the powdery white beaches, awe-inspiring karst limestone topography and stunning reefs are actively transforming a portion of their destinations into algae-dominated reefs.

If this practice does not stop, those making a living from the natural beauty of the Andaman coast once again look to threaten the sustainability of their own livelihood through either ignorance or carelessness.

Put down your wallets Phuket, pick up functional training