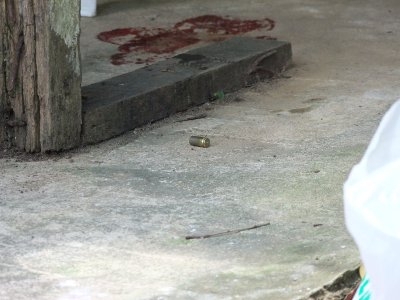 PHUKET: The key witness to the shooting death of a Ratcha Buri man in Phuket last weekend remains at large, and the investigation is suspended until relatives hold funeral services for the deceased.

The victim, 34-year-old Yodthong Pinjit, was found dead of a gunshot wound to the top of the head in his small home near Patong Temple last Saturday morning.

A family member told police he was engaged in a morning drinking session with his cousin, 35-year-old Montri Pissadu, shortly before his body was discovered.

A half-finished bottle of expensive Scotch whiskey remained on the porch table where the two men had been drinking.

Mr Pissadu, 35, has not been seen since.

“The investigation has not progressed much as his relatives don’t want to talk. Also, nobody witnessed exactly what happened because Yodthong and Montri were the only ones at the scene,” Patong Police duty officer Chaowalit Neamwadee said.

“Montri disappeared right after the incident and we haven’t been able to locate him yet,” he added.

The two men were relatives and friends who lived side-by-side without incident for a long time, he said.

Ampai Pissadu told the Gazette that the gun belonged to her son, Mr Montri, who usually fired it into the sky.

Patong Police will arrange to have relatives bring in Mr Montri for questioning after his cousin’s cremation, Lt Col Chaowalit said.

“Beaten, cheated, cursed’: Phuket tourists get it all