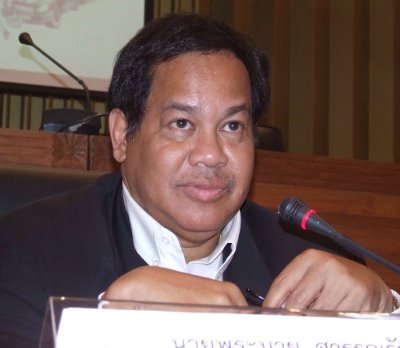 Mr Pranai this afternoon chaired a meeting at Provincial Hall attended by Vice Governor Niwit Arunrat and about 20 other officials from provinces along the Andaman coast, all present to discuss what to do about tourists being cheated while on holiday.

“At that time, I tried to solve the problem of tuk-tuk drivers leaving tourists stranded at their destination.

“The drivers didn’t bring them back because they had a deal with other drivers to go and pick them up.

“Sometimes the drivers offering the return trip left the tourists little choice but to pay more than they paid the driver who took them there,” he said.

“This problem is still going on,” he added.

Bhuritt Maswongsa, a Vice President of the Phuket Tourism Association, relayed to Mr Pranai reports of a dire scenario many tourists face.

“We have heard many reports that illegal workers in Phuket, such as Nepalese, Pakistani, Burmese and Sri Lankan people working in tailor shops, coerce tourists.

“They are rude and sometimes beat tourists if they don’t buy anything from their shops,” he said.

Other figures at the meeting told Mr Pranai that illegal tour guides were still a problem.

Koreans and Russians were named as the main culprits working illegally as guides, an occupation reserved for Thais.

Deputy Pranai told the meeting that he will compile a report of the abuses and hand it to Permanent Secretary Vichean Chavalit next week.