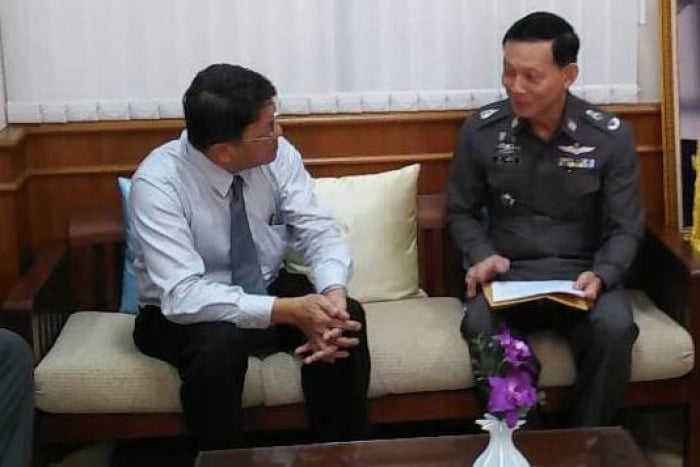 PHUKET: A group of high-ranking police officers and island officials met with Phuket Public Prosecutor Pisitpol Phumsawat yesterday to follow up on the progress in the island’s high-profile taxi mafia and billion-baht-beach scheme cases.

“I have been ordered by the Royal Thai Police and the National Council for Peace and Order to follow up on these cases, as they have received a lot of media attention,” Region 8 Police Deputy Commander Paween Pongsirin told the Phuket Gazette today.

“I personally want to keep an eye on them as well, as we worked hard on those investigations. After we find out what exactly is happening, we will report back to the Royal Thai Police Headquarters in Bangkok.

“We met with Mr Pisitpol to submit a formal letter requesting information about the investigation progress on each of the cases that were handed over last year regarding the taxi mafia and beach encroachment in Karon.

“I asked in particular about Karon Mayor Tawee Thongcham and other high-ranking officials who were charged by police for illegally issuing permits for local beach vendors to use public beach land [story here], as well as members of the Keesin family and their alleged mafia charges [story here].”

Maj Gen Paween said that the public prosecutor did not provide any clear information about the state of the investigations.

“Mr Pisitpol did not specify what is causing the delay. He only said that they are trying to carry out a fair investigation,” Gen Paween explained. “I have informed him that we are willing to provide whatever evidence his officers might require, but he has not asked us for anything at this point.”

Gen Paween noted that he was not trying to interfere in the prosecutor’s work.

“I am only following my superiors’ orders,” Gen Paween said.

Mr Pisitpol explained to the Gazette that his office was still reviewing evidence.

“It takes time to investigate these cases. We must be very careful and ensure that both sides receive fair judgment,” Mr Pisitpol said.

No lifeguards on Phuket beaches tomorrow