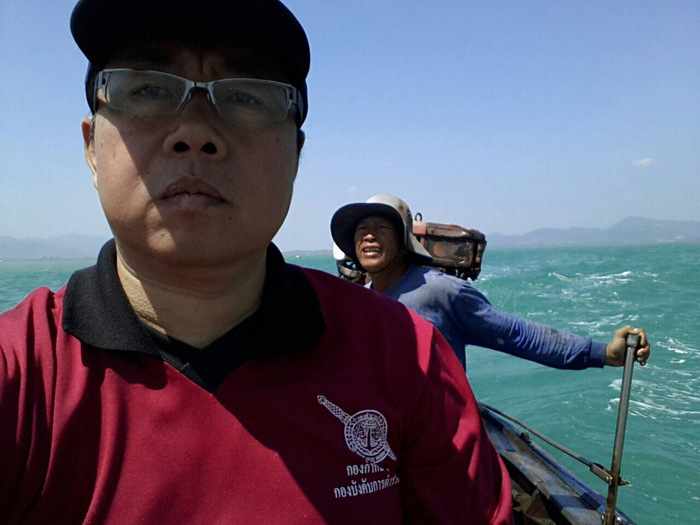 PHUKET: Fast action by the Phuket Marine Police freed two Myanmar nationals who were trapped in indentured labor on a fishing vessel as Thailand continues its campaign to rebut its downgrade to the lowest tier on the US State Department’s “Trafficking in Persons” report.

“We take this issue very seriously,” Lt Col Panya Chaichana of Phuket Marine Police told the Phuket Gazette today. “We are searching for the agent, so that we can dismantle the human smuggling network that has infiltrated Thailand.”

“We do have the suspects’ names, but can’t reveal them at this time.”

Thailand’s fishing industry came under fire as reports of entrapment and slavery made headlines around the world. In response, Phuket has set a special deadline for reporting all migrant laborers working on Thai fishing vessels – legal and illegal (story here).

The two fishermen who were rescued, 50-year-old Au Pan Muang and 21-year-old Ye Lin, claimed to have been cheated by a human smuggling agent, Col Panya told the Gazette.

“The father-son pair said that they were told that they would get jobs working in a sugarcane field. However, they ended up on a fishing boat and didn’t know how to get out of the situation,” Col Panya said.

“They were trapped by debt and didn’t have identification cards, so they were afraid if they fled the boat they would be arrested by the police.”

“Eventually they contacted relatives who were able to file a complaint and set us on the trail to free them from the fishing vessel Chok Trakarn 5.”

Marine Police dispatched a team of about 10 officers to meet the boat at Rassada Pier. Once the boat arrived, it was searched and the entire crew was brought to the station for questioning, Col Panya explained.

Officers from the National Operation Center on Prevention and Suppression of Human Trafficking and Social Development and Human Security Phuket office were called in to question the crew.

“It became clear that the two men just wanted to go home. The rest of the crew were fine with returning to the ship; none of them had a complaint to file,” said Col Panya.

Marine Police have contacted Immigration to have the pair deported, as requested.

The fishermen are the second pair in Phuket whom authorities have recently helped escape indentured labor after they were smuggled into the country. Last month, two Cambodians were rescued from a clothing shop in Phuket Town (story here).

The US State Department’s report said that “Anti-trafficking law enforcement efforts remained insufficient compared with the size of the problem in Thailand, and corruption at all levels hampered the success of these efforts,” (story here).