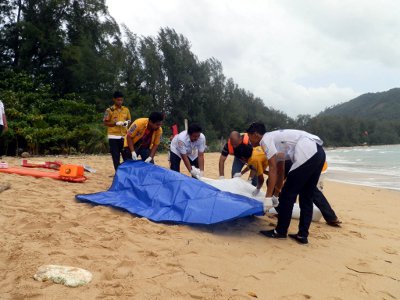 The man’s wife, Roongruthai Phaha, 35, told police that her husband was last seen departing for a fishing trip on Saturday.

He often went squid fishing on rocks in the area where his body was found, she said.

“She [Mrs Roongruthai] said he usually stays overnight and comes home in the morning,” Lt Col Prakob Boonkwan confirmed to the Phuket Gazette.

“The fishing area he goes to is difficult to access. You have to park your vehicle at a deserted hotel, then walk about two kilometers to get to the area he usually went to,” Lt Col Prakob explained.

An initial investigation by police revealed that Mr Sanit had not been drinking or in an argument before his death.

However, police are continuing their investigation to determine whether or not Mr Sanit’s demise was a case of accidental death or murder.

“He could have been struck by a large wave. With this kind of weather it is possible to get swept away by the waves,” Lt Col Prakob added.