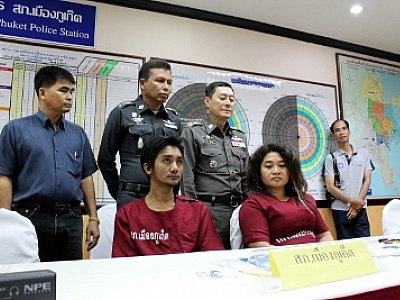 PHUKET: A spate of arrests by Phuket police in the past 24 hours has led to drugs with a street value of more than five million baht being seized.

Officers who had been trailing her for six months finally moved in to arrest her while she was walking along on Dilok Uthit 2 Road on her way to the fresh market behind Robinson department store.

Some of the drugs were found in her Toyota Vigo pickup truck parked nearby while the rest was found in the bedroom of her massage parlor, Chao Khun Nuad Phan Thai, on Sakdidet Road in Phuket Town, said police.

Presented to the media at a press conference at Phuket City Police Station this morning, Chuleekorn said that money problems lured her into trafficking.

“I am divorced and I have two children. I needed the money to pay for many expenses, that’s why I did this,” she said.

Chuleekorn said she was paid 50,000 baht for bringing the drugs from Bangkok.

She had done similar drug runs before, being paid 20,000 baht paid each time, she said.

Piyapan was called to make a drug delivery near the church on Chao Fa East Road in Phuket City, where officers were waiting for him.

Both Chuleekorn and Piyapan were charged with possession of ya bah and ya Ice with intent to sell.

Meanwhile in Chalong, police arrested 19-year-old Thawatchai “Em” Jokkaew in a raid on a house in Saiyuan in Rawai just after midnight last night.

The drugs were valued by police to have a total street value of nearly four million baht.

Officers also found bullets – but no handgun – in his room, said police.

They are also searching for Kraingkrai “Fad” Mahosod in connection with the raid.

Thawatchai told police during a press conference at Chalong Police Station today that he had made drug deliveries within Phuket “two or three times” before his arrest.

He was paid 5,000 baht for each delivery he made, Thawatchai said.

Thawatchai also said his drug deliveries were coordinated by a prisoner, but declined to say which prison his “boss” was incarcerated in.