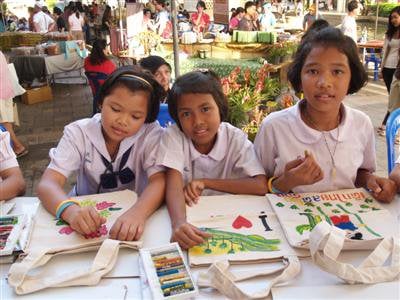 PHUKET TOWN: The ‘Phuket No Shopping Bag’ project was officially launched on Sunday, but a controversial plan by island retailers to begin charging for plastic bags is apparently on hold.

The launch ceremony, which included the signing of a Memorandum of Understanding (MoU), was held at 4:30pm at Central Festival Phuket.

About 1,000 people also turned up for the event, which was the highlight of a three-day public awareness campaign aimed at reducing the use of plastic bags and promoting other ‘green’ initiatives, such as recycling and the development of renewable energy technologies.

Many government and private sector organizations had exhibits, which included displays of artificial flowers and other items made from recycled goods. There were also a wide variety of reusable cloth bags for sale.

Plans to create a financial incentive for people to use reusable shopping bags has apparently hit a snag, however.

Although 24 major retailers on the island signed an MoU agreeing to charge one or two baht for plastic bags, the Valentine’s Day launch date has been postponed indefinitely while project organizers continue to lobby three major holdouts to go along with the plan: Tesco-Lotus, 7-Eleven and Carrefour.

Energy office director Mr Jirasuk said representatives of all three are expected to meet with the Phuket governor soon to discuss their possible involvement.

A well-informed source told the Gazette that Carrefour is willing to sign the MoU, but only if Tesco-Lotus does so as well.

A spokesman from CP ALL, which operates all 7-Eleven outlets in Thailand, earlier told the Gazette that it would not charge for plastic bags because it already has a policy of using sunlight-degradable plastic bags at all of its shops in Phuket and other tourist destinations in the region.

Despite this, many 7-Eleven outlets in Phuket not run directly by CP ALL, but through its franchisees, continue to distribute regular plastic bags in large numbers and free-of-charge.

Some retailers are taking their own approaches to encourage the use of reusable bags.

For example, for every purchase over 300 baht at the B2S Bookstore at Central Festival Phuket, if the customer takes the products home using their own bags the store will donate three baht to the United Nations Children’s Fund, better known as UNICEF.

Central has also agreed to donate the proceeds from the sale of plastic bags to environmental protection projects.

Have you been getting charged for plastic bags? If so, be a citizen reporter by sending an email to editor@phuketgazette.net or posting the name of the store in the reader’s forum below.