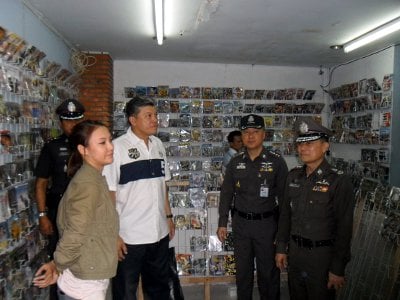 PHUKET: Raids on Phuket shops selling pirated DVDs and CDs this evening ended with 11 arrests and evidence worth up to 6 million baht seized.

Led by Pol Lt Gen Krisada Pankongcheun, deputy director of the police Center for Suppression of Intellectual Property Crime, the raids targeted 13 shops in Patong, some along the beach road and others in the OTOP Plaza on Rat-U-Thit 200 Pi Road.

Accompanied by Phuket Provincial Police and representatives of the company with the copyright for the products, the officers came with 13 search warrants.

Raids on 11 shops netted pirate vendors, while the operators of two other stores managed to flee.

Thousands of confiscated DVDs and CDs from the shops were piled into black trash bags and taken to Patong Police Station, where they are still being counted.

Phuket Provincial Police Commander Pekad Tantipong said after the raid that the sale of counterfeit goods in Patong was still rife, despite the area being designated a “red zone” for strict enforcement since before he took up his current post.

Efforts to stop the illicit trade are hindered by the fact that the vendors “know local authorities” and employ high-tech trickery to evade detection and capture, he said.

The shops typically have doors with remotely-controlled locks and other security features that allow vendors to escape in the event of a raid, he said.