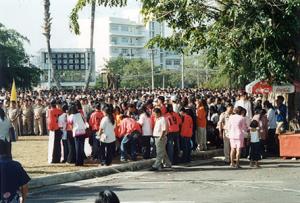 PHUKET TOWN: About 3,500 people gathered this morning at the Provincial Hall on Narisorn Rd and pledged to help eradicate illegal drugs on Phuket. At a mass ceremony starting at 9 am, people from all walks of life, including students, community leaders, members of clubs and associations and owners of entertainment venues, vowed not to become involved with drugs and to help the government with its fight against drugs. People taking part then signed a register to seal their pledge. The mass vow, which was held simultaneously at provincial offices nationwide, precedes the enforcement of Prime Minister Thaksin Shinawatra’s promise to stamp out drugs nationwide within a period of three months, starting tomorrow. Speaking after the ceremony, Governor CEO Pongpayome Vasaputi said he had been informed of about 200 drug pushers in Phuket, most of them small- to medium-volume dealers. “We will campaign against drug dealers and try to educate and rehabilitate drug addicts,” he said. He added that people could inform officers of drug dealers by calling the 24-hour toll-free hotline, Tel: 1688, or by writing to P.O. Box 101, Muang District, Phuket 83000.