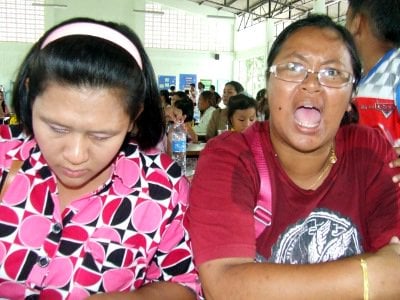 About 200 parents and children gathered at Wat Thepnimit daycare center in Wichit today to complain about the teacher and the subsequent firing of four other teachers who parents claim were responsible for exposing the abuse, not inflicting it.

In response to the crowd’s anger, the eight daycare committee members asked them to form their own committee and discuss the issue with the temple abbot this weekend.

Sompis Petthongnang, 29, whose son is shown being beaten in the video, told the Phuket Gazette that they were first shown the video clip by outraged teachers at a parent-teacher meeting last Sunday.

“In the video, the teacher hits my four-year-old son Heng on both sides of his head,” Mrs Sompis said.

“He’s got physical problems – one of his hands doesn’t work very well – and the teacher didn’t consider that when she saw he was doing his schoolwork improperly, so she hit him on the ears,” she said.

“She [the teacher] used to pinch my son’s ear, which left marks, but she always said that it happened before he arrived at school. She admitted to snapping him with rubber bands every day – I can accept small things like that, but not slapping him like she does in the video,” Mrs Sompis said.

The teacher in question is Pranee “Kru Kiew” Jantalert, 47, who has been a teacher at the daycare since it was established about 20 years ago. She set up the center with the abbot of Wat Thepnimit as a preschool.

Jaruni Janjem, 30, told the Gazette, “My four-year-old son Game told me that the teacher slapped him on his forehead, but I didn’t really believe the severity of that until I saw the clip on Sunday.

“Our children were beaten because they didn’t do perfect work, like not writing in the lines or drawing pictures perfectly. I never thought my son would experience cruelty like that, so when I saw what happened on that video I was furious.

“How could she do that to such small children?” Mrs Jaruni said.

“The other teachers told me that Kru Kiew hit the children every day, and that they [the teachers] tried asking her to stop many times, but she didn’t listen,” she said.

Mrs Sompis added, “We heard that she had been hitting the students for a long time but we never thought that our kids would be hit also. Some people told us that she was instructing the children very well and that her methods helped them become good people, so we believed that. We never thought she was this kind of person.”

One little girl was left with a full hand print on her face after being slapped by the teacher, Mrs Sompis said.

There were 110 children divided into two classes at the center. Kru Kiew had 55 students, with four other female teachers taking care of the rest.

“When we informed the abbot about this, he didn’t even look at the video to see what had happened. He seemed to not really care about the children,” Mrs Jaruni said.

“He told us that if we’re not happy, we can send our kids to other daycare centers,” she said.

Mrs Sompis and Mrs Jaruni both told the Gazette that they would definitely be sending their children elsewhere.

They also disagreed with the firing of all the teachers at the daycare.

“We would like to know why the other four teachers were fired,” Mrs Sompis said.

“Actually the abbot originally fired the four others, keeping Kru Kiew, but after we came to the center today her termination letter was posted on the board,” she said.

Panyaluck Suriya, 35, was one of the other teachers at the school – until today.

“We received termination letters dated July 27 telling us to leave the center. We don’t know why we’ve been fired, so we have come here – like the parents – seeking some answers,” Mrs Panyaluck told the Gazette.

The letters informed them that their employment would be terminated as of October 1 this year. They had been working at the center for between two and three years.

Mrs Sompis said that Phuket City Police told them that they would summon Kru Kiew for questioning on August 1. If she fails to appear, they will seek an arrest warrant.

Panlop Engchuan, director of Wat Thepnimit daycare and a Wat Thepnimit committee member, confirmed to the Gazette that he has seen the video.

He said that the video has to be taken as obvious evidence, and that the committee is only coordinating between the abbot and the parents.

“Wat Thepnimit abbot Pra Samu Amornsak Athimutto has arranged a discussion with the parents and the committee to talk about the teachers and the center this coming Sunday,” Mr Panlop said.

Nilobon Chianchankarn, 29, the teacher who captured the video, told the Gazette that she and other teachers, along with Kru Kiew and some parents will go to Phuket City Police Station for questioning.

“We always video record the classes for the children’s learning development, but that day the camera caught Kru Kiew hitting the children because it was left recording,” Ms Nilobon added.