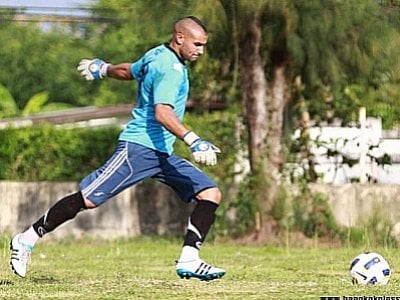 PHUKET: FC Phuket will kick off the second half of the Thai Premier League (TPL) Division One 2011 season this weekend in Nakhon Pathom.

Phuket face Rajapracha FC, or the “Crowns”, who sit 7th in the table, two places ahead of Phuket in 9th position.

“Kickoff will be at 4pm on Sunday, July 31 and the match will be played at Mahidol University Salaya campus football stadium,” confirmed Soranun.

“There’s been some confusion on many websites about our schedule. Rajapracha had requested to postpone the game from July 30 to 31,” he explained.

Phuket’s last encounter with Rajapracha was on February 26 at Surakul stadium, ending in a disappointing 1-1 draw.

However, a few days later Phuket fans rejoiced when the TPL amended the draw to a victory following protests about Rajapracha fielding six foreign players on the pitch, when rules permit a maximum of five.

The 5,000 Phuket supporters who went to that match will not be outshone this Sunday, however, since MU Salaya stadium has a maximum capacity of 2,800 seats.

Nonetheless, fan turn out – or lack thereof – will not be Phuket’s focus with three upcoming away matches.

Soranun, who travels and coordinates the team on the road said, “Our FC Phuket squad is in full form and we are ready to win every game.”

“After the game against Rajapracha, the squad will stay in Bangkok for a month before coming back to Phuket for a home game against Bangkok United on September 10.”

“During the month’s stay in Bangkok we have matches scheduled against BBCU, JW Rangsit and RBAC FC,” he explained.

Other TPL Division One games scheduled for this weekend are as follows: