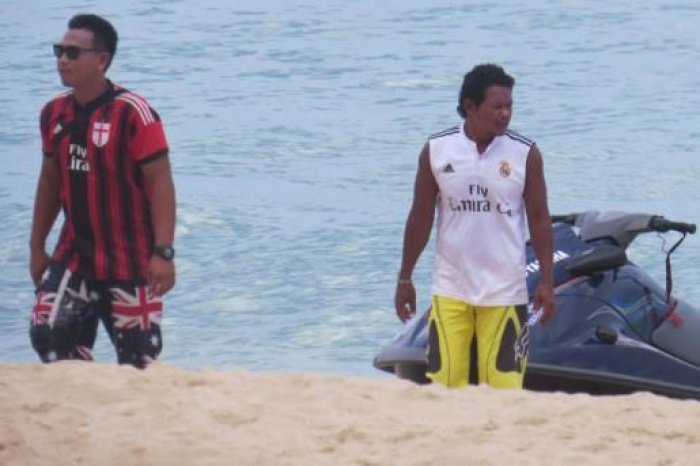 PHUKET: Marine officials are investigating reports that jet-ski operators have returned to Surin Beach, where the wave-riding machines are banned.

The investigation, led by Phuket Marine Office Chief Phuriphat Theerakulpisut, follows recent reports and photographs of jet-ski touts bringing the machines onto Surin Beach, as well as allowing them to be driven dangerously close to swimmers.

“I will have my officers check whether or not these guys are operators, or if they are just tourists that have ridden the jet-skis over from another beach,” Mr Phuriphat told the Phuket Gazette.

“If they are jet-ski operators, we will find out which club they belong to. If they are not members, I will take legal action against them.”

Regarding jet-skis being ridden to Surin from nearby beaches, Mr Phuriphat told the Gazette that he has not taken any serious measures to stop the wrongdoing, as to the best of his knowledge it is being done by unknowing tourists.

“Jet-skis are banned from Surin Beach, but some tourists drive them there from beaches nearby. At this stage, we do not have any measures in place to prevent this from happening,” Mr Phuriphat told the Gazette.

“I do not know what to do. I have ordered jet-ski operators to inform tourists about the ban at Surin Beach, but many tourists do not abide by the rules.

“It would not be fair of us to fine the jet-ski operators over something that their customers are doing.”

Mr Phuriphat added that he would call the jet-ski operators together again to discuss the issue further.

However, a date has not yet been set for this meeting.

This is not the first time complaints have been made about dangerous jet-ski antics at Surin Beach.

Ma-ann Samran, president of the Cherng Talay Tambon Administration Organization (OrBorTor) witnessed the practice himself during an inspection of the beach in January.

Duirng the inspection, he watched a rented jet-ski from Laem Singh being driven to Surin Beach, where the rider repeatedly came dangerously close to swimmers at high speed (story here).

Asked about the ongoing jet-ski dilemma on Surin Beach, Mr Ma-ann told the Gazette that it was up to Mr Phuriphat to find a solution.

“It is beyond my authority to enforce jet-ski regulations. Mr Phuriphat has taken full responsibility for the issuance of permits and enforcement of the rules,” he said.

“I have already talked to Mr Phuriphat about ways to ensure people’s safety at Surin Beach. One idea we had was to rope off the area to prevent jet-skis from coming near swimmers.

“However, after discussing the idea with OrBorTor councilors, we agreed not to rope off or install buoys in the water, as jet-skis are already banned. We also do not feel it is sensible to pay more money to enforce a rule that is already set.

“I personally am against installing ropes and buoys, as it would surely affect the beach’s natural beauty.”