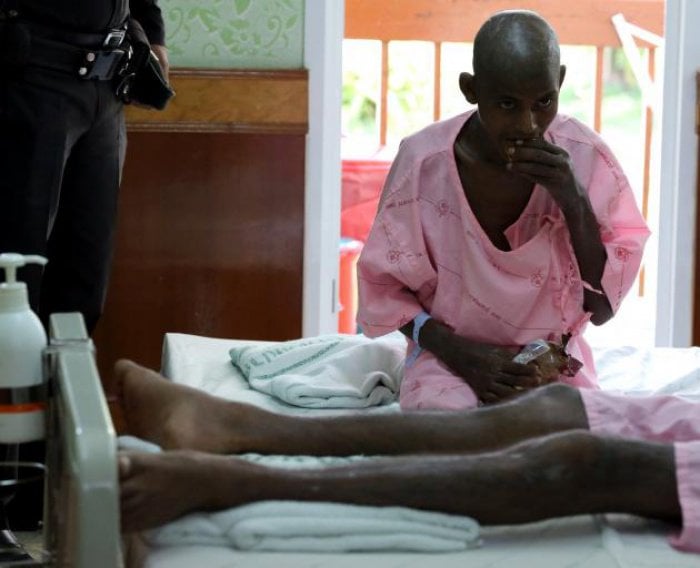 PHUKET: The authorities have arrested four of eight suspects wanted in connection with an alleged extortion and murder camp in Thailand’s southern border province of Songkhla.

All eight have been charged with human trafficking, illegal detention and seeking ransom money.

Authorities made the arrests following 26 bodies being exhumed from a mass graveyard in a border zone in Songkhla’s Sadao district on Saturday .

At least one witness has said that the murders took place at a nearby border campsite where hundreds of migrants had been held.

It is believed that the bodies in the graveyard came from the camp.

The four arrested suspects have denied any role in illegal detention, extortion and human trafficking. Mr Asan has confessed to having a gun and ammunition in his possession illegally.

National Police Commissioner Somyot Poompanmoung said that police were urgently gathering evidence and would bring all the culprits to justice, even if they were government officials or politicians.

“If evidence suggests they might have been involved, we will arrest them,” Gen Somyot said.

Judging by the fact that some bodies had been added to the grave recently, while others had long been buried, it was possible that the camp had been operating for a long time, Gen Somyot said.

“These policemen have been arrested and prosecuted. It’s just that their cases have not appeared in news reports,” he said before he attended a meeting with Deputy Defense Minister and Army Chief Udomdej Sitabutr on how to tackle and prevent the trafficking of Rohingya.

During the meeting in Ranong, Gen Udomdej said that officials involved in the trafficking of Rohingya people into Thailand would face decisive legal action.

He instructed relevant state agencies to prepare a list of suspects involved with traffickers who smuggled Rohingya and other “boat people” into Thailand.

Gen Udomdej, who is also deputy director of the Internal Security Operations Command (Isoc), admitted that the trafficking network in Ranong was “not a small movement because they have been active for some time”.

Gen Somyot said that Prime Minister Gen Prayut Chan-o-cha had directly instructed him to work closely with Gen Udomdej to initiate a fast crackdown on human-trafficking gangs that had caused severe damage to Thailand’s reputation.

Ranong has been a key entry point for illegal migrants from Myanmar and Bangladesh.

Meanwhile, the head of the Satun Police will be suspended from duty in connection with the ongoing investigation into human traffickers, said Gen Somyot yesterday.

National police commissioner General Somyot Poompanmoung said that a team of investigators led by his Gen Aek Angsananont had suggested a transfer of Maj Gen Sunthorn Chalermkiat, who is chief of the Satun Police, to an inactive post at Royal Thai Police headquarters.

Gen Somyot said that this was because Maj Gen Sunthorn has close ties with a suspected leader of the trafficking ring.

Gen Somyot said that he would also transfer the five most senior officers at Padang Besar police station in Songkhla, including the superintendent, out of their current jurisdiction. Those transfers are in addition to seven more police transfers from Padang Besar of officers suspected of taking bribes from traffickers.