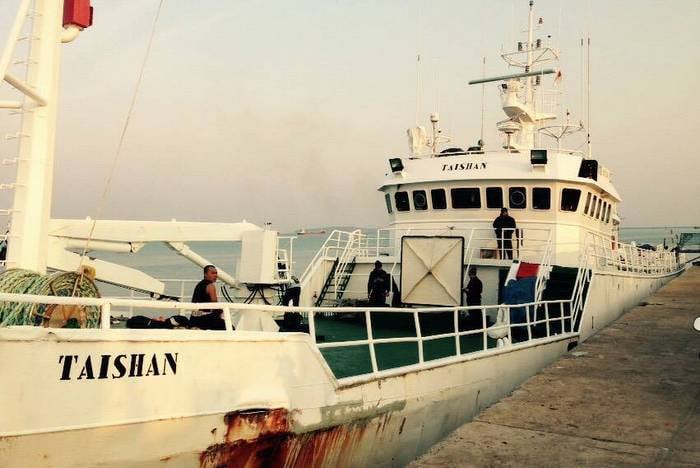 PHUKET: Officials have charged the Peruvian captain of an illegal, unreported, unregulated (IUU) fishing vessel for falsely reporting the cargo of his ship as he attempted to offload 182 tonnes of Antarctic toothfish illegally caught in the Southern Ocean.

The ship, which recently had its name changed from Kunlun to Taishan, had already fled from the navies of New Zealand and Australia, as well as global conservation organization Sea Shepherd, before passing through Indonesian waters and mooring near Phuket (story here).

The handler that received the fish, South Services Co Ltd, has also been charged for its role in illegally importing the fish into Thailand.

Canadian environmental activist and founder of the Sea Shepherd Conservation Society Paul Franklin Watson posted his concerns on his Facebook page last Sunday that the Taishan and its crew would be merely pushed out of Thai waters without any legal action being taken against them.

“The Spanish newspaper La Voz de Galicia is reporting that a Thai government ship will escort what they describe as a ‘pirate’ ship to mile 201, where it will be freed and banned from returning to Thai
waters,” Mr Watson wrote.

“No fines. No arrests. And there is no information yet as to the location of the US$5.6mn cargo of 182 tonnes of toothfish; if it was returned to the Kunlun [now Taishan] or if it is off to market to restaurants and fish markets around the world.”

Speaking to the Phuket Gazette this morning, Mr Charoen was able to lay to rest some of Mr Watson’s concerns about the handling of the case, as he confirmed that Taishan would remain at the Phuket Deep Sea Port until at least the Thai investigation was complete.

“The vessel remains at the Phuket Deep Sea Port, and the fish product is being held at the Songkla Customs office while we continue our investigation,” Mr Charoen said.

“It will take time for us to conduct the investigation. Until we have sorted out and finalized everything, the boat will remain in Phuket. I have no idea for how long it will remain in our custody.”

Mr Watson additionally voiced his concern that no net or other fishing equipment was found on board the fishing vessel.

“One very worrying fact is that the Thais found no nets or fishing gear on board the Kunlan. These nets were seen on board by the New Zealand Navy two months before. It is assumed that the Kunlun threw the nets, which could exceed 100 kilometers, over the side prior to entering Thai waters. If so, this would mean that there is now a massive drifting ghost net causing ecological havoc in the Indian Ocean,” Mr Watson wrote.

Mr Charoen confirmed to the Gazette that the Marine Office, Fisheries Department and Customs Office were working together with Interpol regarding alleged crimes that occurred outside of Thai waters.

“Many of the alleged violations occurred outside of our jurisdiction. So we are expecting Interpol to take the lead in regards to seeking justice in those alleged crimes,” Mr Charoen said.

There are two well known ways to get from Kathu to Kalim or Kamala – one is across the Patong Hill, and the other is much longer, through Srisoonthorn and along the coastal road from Surin the Kamala (very scenic too).

But there’s also another way. Also very scenic but will take you about 2 hours through dense forest although there is a well-worn walking track. The track will take you from Kathu up to the Kalim Viewpoint. From here you can head back to Kathu along a different path, or down into Kalim, near Patong.

Starting about halfway down Soi Namtok in Kathu, you head up a nondescript road past the Flying Hanuman zipline attraction, although there’s no sign at the entrance to the soi (below). About the first kilometre is paved but then becomes increasingly ‘agricultural’ as you get higher into the hills, heading towards the Kalim Viewpoint. There’s also a small temple on the way up.

PHOTO: The start of the trek, a small soi off Soi Namtok – Google Maps

It will take around 2 hours to trek up to the Kalim Viewpoint. The walking is quite strenuous and you’ll need to be wearing the right shoes and take plenty of water – there’s no 7/11s on the way! As you get nearer the top, to the viewpoint, the track becomes less drivable although the track is still quite open and easy to follow. If you’re feeling a bit lazy you can take a motorbike about halfway up the road until you’ll need to proceed on foot from there.

From the Kalim Viewpoint you can see across Kalim to Patong Bay and the land that stretches along the bay south of Patong Beach. From the top you can either make your way down to Kalim or another exit along the Kalim-Kamala Road, just near the Iguana Beach Club.

You can also head back another way to Kathu, a longer return track that skirts around the top of the Kathu Waterfall. A lot of that track gets very narrow and parts of it are up and down the hills, some of it very steep.

The views are amazing and you get to see a vast swathe of Phuket, still very close to popular locations like Patong, Kamala and Kathu, but untouched by any civilisation.

You’ll need to be in reasonable health to take on the trip but, just to go up to the Kalim Viewpoint and back, or down into Kalim, should take around 5 hours in total. On a scale of 1 – 5 for difficulty, we’d rate it a 3. An easy trek for experienced people but will need a bit of planning if you’re not an experienced trekker.

Even on a hazy day, as it was today, the views were amazing. But best to start off early morning when the weather is cooler. Well worth the time for the views and the opportunity to see more of Phuket, away from the bars and beaches.

Thanks to BT for the pics and information.