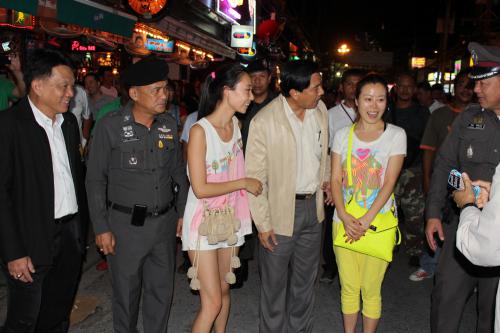 The international pop star stirred an online furore last month after she posted photos on Instagram of slow loris touts on Bangla, and posted a Twitter message about a “shocking” adult show she had witnessed (story here).

“Warunyoo Jornmuang, owner of the Season bar on Soi Bangla, was arrested for operating an entertainment venue without a permit and for providing a lewd show. The case was handed over to the Patong Police for further action,” Kathu District Chief Veera Kerdsirimongkol told the Phuket Gazette.

“We wanted to make sure we would see things as they really are and what illegal activities were going on,” Governor Maitri said, explaining the lack of forewarning.

“I also had plainclothes police patrolling the area and assigned officers to maintain CCTV surveillance along the road to make sure that police can help tourists in their time of need,” he said.

In addition to Mr Veera, joining the governor for his Bangla walk were Phuket Provincial Commander Ong-art Phiwruangnon and Patong Superintendent Chiraphat Pochanaphan.

“We did not find any illegal animal touts on Soi Bangla,” Mr Veera noted.

During the inspection tour, the officials stopped to speak with tourists to let them know that their safety and well-being were a top priority.

“A lot of tourists asked to have their photo taken with the governor. It was good to see so many smiles from tourists,” Chief Veera said.