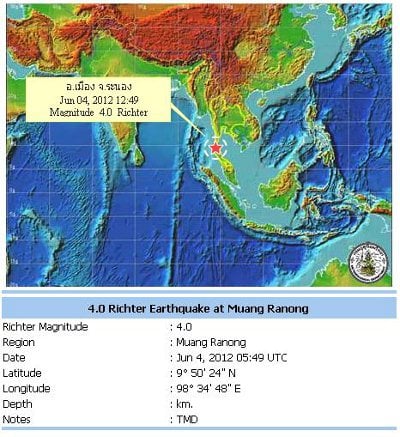 PHUKET: An earthquake registering 4.0 on the Richter scale struck Ranong province, just north of Phuket, at about 1pm today, shaking houses along the coast and scattering villagers in fear.

Ranong is best known among Phuket expats and long-stay tourists as the jump-off point for “visa runs” to Myanmar.

Paiboon Aiamsuwan, director of the Thai Meteorological Department (TMD) monitoring station in Ranong, confirmed that the epicenter of the earthquake was located under the beachfront area of Ngao in Ranong’s Muang District, about 110km north of Phuket Town.

“The quake was felt all over Muang District, but the strongest tremors were reported at the beachfront area near the mountains in Ngao subdistrict,” Mr Paiboon said.

The quake was the result of movement along the Ranong Fault, a series of subfaults starting in Prachuap Khiri Khan province that extend all the way south along the Andaman Coast, pass under Ranong province, and end in the Andaman Sea, he explained.

As with the 4.3 Richter earthquake that struck Phuket on April 16, today’s quake in Ranong left villagers in fear of an imminent, stronger earthquake. The tremors today reportedly moved furniture and rattled houses in the area.

“I urge all villagers to remain calm. A 4.0 Richter earthquake is not strong. There have been no aftershocks and I have not received any reports of damaged buildings,” said Mr Paiboon.

Regardless, Ranong Governor Peerasak Hinmuanggao said he would coordinate with the Ranong Office of Disaster Prevention and Mitigation, the local administration organization and experts to inspect villagers’ houses for cracks or other signs of damage

He also called for local residents not to panic.

“The earthquake experts reported long ago that earthquakes can happen here since we are on a fault line. Even though the tremors can be quite strong, they are not dangerous.

“I have ordered the relevant officers to monitor the situation. So far, I have not received any reports of aftershocks,” he added.