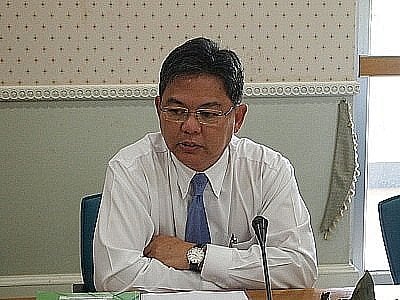 PHUKET: The Phuket Election Commission (PEC) has confirmed the results of elections in Rawai Municipality last month, but has yet to set a date for the Phuket Provincial Administration Organization (OrBorJor) council election because restructuring of constituency boundaries is still underway.

Mr Kittipong confirmed the May 13 victory of incumbent Rawai Mayor Aroon Solos, as well as several other members of Mr Solos’ Pattana Rawai (Develop Rawai) Group. He listed the confirmed winners as follows:

In other election news, incumbent Somjai Suwansupana will run unopposed in the June 16 (8am-3pm) balloting for Phuket City Mayor, needing just 10% of the eligible vote to ensure another term.

Despite the apparent cakewalk for Ms Somjai, she and her fellow ‘Young Turks’ council seat candidates have been campaigning hard with sound trucks and distribution of fliers to ensure they do not lose any council seats to the upstart Khon Roon Mai 2555 (New Generation 2012) Group led by former council member Phairoj Ruamphunpong.

The Phuket Gazette would like to remind business owners in the restaurant and entertainment industries that in accordance with the Election Act, as the election date has been set for Saturday, June 16, there will be a ban on selling alcohol within the Phuket City Municipal area from 6pm Friday, June 15, through to midnight June 16.

Mr Kittipong said the PEC will hold elections for mayor and council seats in Karon Municipality on July 15, from 8:30am to 4:30pm. Those interested in registering candidacies will have from June 18 to June 22 to do so, he said.

Hence an alcohol ban will apply in Karon from 6pm on Saturday, July 14, until midnight on July 15.

As for the OrBorJor council that ended its term on April 19, Mr Kittipong said his agency was working hard to draw up new constituency boundaries so that the balloting could take place as soon as possible.

The revamped council must be a 24-member group, with 15 representatives from Muang District, six from Thalang and three from Kathu.

“I believe we can finalize the new constituency boundaries soon,” Mr Kittipong said.

After the new OrBorJor council convenes, it will be led by incumbent President Paiboon Upatising, who won in a landslide victory on April 7 after resigning his position to force an early election.

The Riddle of Phuket’s Black Sands