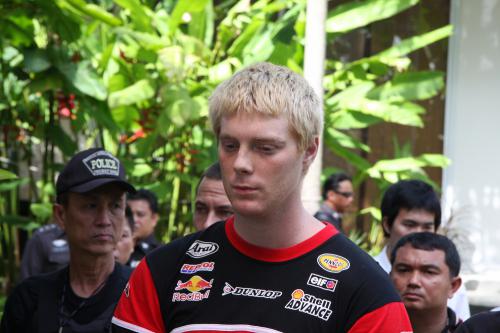 PHUKET: Tommy Viktor Soderlund, one of two Swedish nationals charged for the stabbing murder of Maksim Schantz two years ago, reiterated his plea of not guilty at Phuket Provincial Court today.

Mr Soderlund, in court to testify, repeated his plea of not guilty and gave his version of events that led to the killing of Russian-born Swedish national Mr Schantz in August 2011 (story here).

Although the Phuket Gazette was prohibited by the court from revealing details of Mr Soderlund’s testimony, a court officer confirmed that the trial was set to continue on Monday, when Mr Soderlund’s alleged accomplice Johan Sebastian Ljung will be called in as a witness.

Mr Ljung was also present at Phuket Provincial Court for his own trial this morning.

“The judge is reviewing the case and evidence, and has set January 24 as the date for handing down a verdict [in Mr Ljung’s trial],” a court officer confirmed to the Gazette.

Mr Soderlund and Mr Ljung both stand charged with premeditated murder and collaboration in robbery, as well as for carrying a knife and an unlicensed firearm with ammunition.

The court made its ruling to try the men separately after Mr Ljung accepted the charges, but Mr Soderlund denied them at their court hearing on November 2 last year (story here).