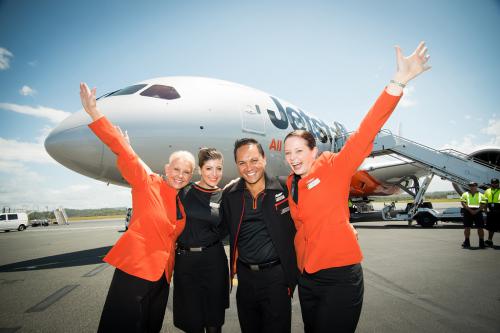 PHUKET: Jetstar Airways has launched its non-stop service between Phuket and Melbourne, connecting Phuket to one of its most important source markets just in time for the tourism high season to kick off.

“The first flight of the service directly to Phuket left the ground on December 14, making it the first direct low-cost carrier service for travellers between the two destinations,” said a Jetstar spokesman.

The direct flights between Phuket and Melbourne will operate every Saturday and Sunday with a third day to be introduced in April 2014.

The second Australian city to be joined to Phuket by direct flights will be Sydney, starting in February next year, when Jetstar will fly state-of-the-art Boeing 787 Dreamliners between the two cities.

“The 787 burns 20 per cent less fuel, has much larger windows and has extra humidity in the cabin providing additional comfort and reducing the impact of jetlag,” said the spokesman.

Additionally, for the holiday season, Jetstar has expanded its schedule from Singapore to Thailand, offering up to five daily flights between Bangkok and Singapore on the Dreamliner.

“Thailand is strategically one of the most important destinations in our network, and this is reflected in both Jetstar Asia’s and Jetstar Airways’ continued capacity growth in the region,” Jetstar Asia CEO Bara Pasupathi said.

“This year alone, Jetstar Asia has welcomed 30 per cent more passengers between Singapore and Bangkok compared to just two years ago” he said.

Jetstar Asia first took to the skies in December 2004. In 2005, Singapore carrier Valuair became the sister airline of Jetstar Asia, focusing on destinations within Indonesia. Jetstar Asia and Valuair operate more than 600 weekly return flights to 21 destinations across 13 countries and territories in the Asia Pacific region.