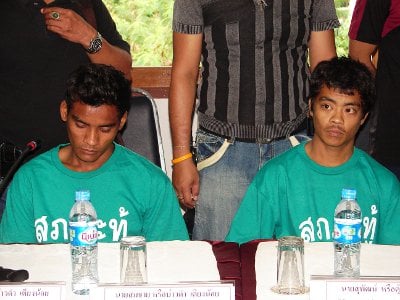 PHUKET: Two brothers wanted for the murder a man in Patong last month were arrested in their home province of Nongkhai and flown back to Phuket to face charges earlier this week.

Suphat “Tu” Tiangnoi, 26, and his younger brother Somchai “Bao Dam”, 23, were presented at a press conference at Kathu Police Station on Wednesday.

The pair were arrested in Nongkhai on Monday in a joint-operation conducted by Phuket and Nongkhai police.

Phuket officers led by Lt Col Sakon Banditsak escorted the brothers back to Phuket, where they arrived at Kathu Police Station the following evening.

The brothers were arrested for the September 23 murder of Aphichart Klangnak, who died of a single gunshot wound to the chest on Soi Phra Barami 5 in Patong.

Both men have been charged with premeditated murder.

Mr Suphat was quoted by police as saying he was walking alone along Soi Phra Barami at about 5pm on the night of the shooting when he got into a fight with a group of four youths, one of them being the late Mr Aphichart.

Outnumbered and being punched in the face, he called to his younger brother for help, he said.

Mr Somchai arrived at the scene on a motorcycle driven by a friend, identified as Somchoke Raksrithong.

During the fracas, Mr Aphichart tried to wrest Mr Somchai’s pen gun away from him.

Mr Somchai fired once, hitting him in the chest. The brothers then fled north on the motorbike, towards Kamala.

Mr Somchai tossed the murder weapon into the sea along the way, his older brother said.

After the shooting Mr Aphichart was rushed to Patong Hospital, where doctors were unable to save him