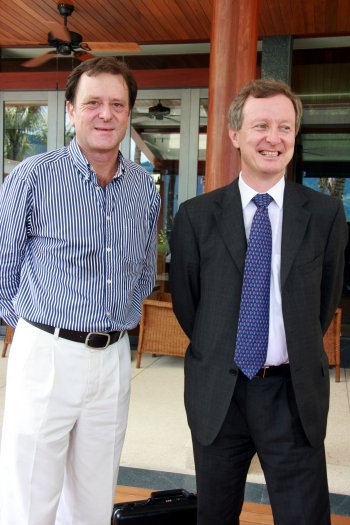 British officials will work closely with their Thai counterparts in their efforts to have the kickboxer extradited to Phuket to face charges for the stabbing murder of American Dashawn Longfellow in Rawai last month, he said.

Last week the Office of the Attorney General of Thailand confirmed to the Gazette that Mr Aldhouse was due to be released from Wormwood Scrubs Prison near London on Friday.

Commenting on Mr Aldhouse’s case at the Andara Resort in Kamala this morning, Ambassador Quayle confirmed that the fugitive kickboxer is still in detention, but said he could give no further details about the terms or location of his detainment.

As for Thai efforts to have him extradited, he said, “It depends on the charge, the evidence presented and the documents being filed… There is an extradition treaty in force, but they [the Thai authorities] have to provide the evidence.”

Like most European nations, the UK generally does not extradite in cases where a suspect could possibly face the death penalty if convicted.

“I can say that there is good cooperation between the British and Thai authorities,” he said.

An officer with the UK’s Serious Organized Crime Agency posted at the British Embassy would assist Thai authorities if needed, he said.

As the case is already in the judicial process, Ambassador Quayle said he “could not speculate any further” about the extradition request, however.

Ambassador Quayle was speaking at a press conference called to announce that a formal gathering will be held at the The Blue Elephant restaurant in Phuket Town tonight to mark the official Queen’s Birthday in the UK.

The event, usually held in June to officially celebrate the birthdays of all former UK monarchs, was this year postponed because of the red-shirt protests in downtown Bangkok in May.

The move was approved by Buckingham Palace, said Ambassador Quayle.

The ambassador also urged British expats in Phuket to register their contact details with the British embassy or with the local consulate. He estimated the number of UK expats living in Phuket at about 5,000.

“We receive appeals for information all the time from people concerned about friends or family traveling or staying in Thailand,” he said.

Those wishing to register on line can do so using “LOCATE”, a service on the UK Foreign and Commonwealth Office website: (www.fco.gov.uk/en/travel-and-living-abroad/staying-safe/Locate/).