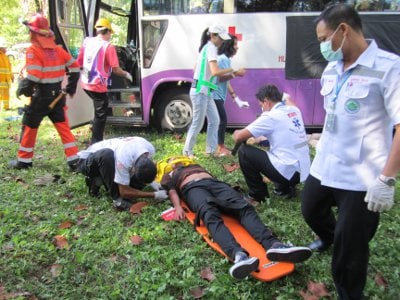 PHUKET: The Phuket Provincial Health Office (PPHO) is spearheading a project to set up an integrated information system to better coordinate emergency response efforts throughout the Andaman coast provinces in disaster situations.

“We collated the working experiences of people throughout the Andaman region who are involved in responding to natural disasters, which includes coordination between government agencies and private-sector organizations,” said PPHO Deputy Director Wiwat Seetamanotch.

Among the 100 people at the meeting were DMAT staff, officers from the Royal Thai Navy Third Naval Area Command, Phuket City Police as well as local officials, PPHO and DDPM-Phuket officers, and representatives from CAT Telecom, TOT and the Kusoldharm and Ruamjai rescue foundations in Phuket.

Dr Wiwat explained that although the PPHO is the central coordinating body for the project, to move to set up the information system is a collaborative effort by the Emergency Medical Institute of Thailand, the Software Industry Promotion Agency (SIPA) and the Phuket office of the Department of Disaster Prevention and Mitigation (DDPM-Phuket).

The move to set up the system follows experts from Japan extolling the profound benefits of an integrated disaster-response IT system at a DMAT training intensive session in Phuket last December.

“We had seven experts from the Japan International Cooperation Agency [JICA] pass on their knowledge on how to manage earthquakes.

“They gave the example of an earthquake striking at midnight. They set up operations center in five minutes, had a medical team ready within an hour and completed their mission perfectly within four days,” Dr Wiwat said.

“That is why the Emergency Medical Information System [EMIS] in Japan is known as one of the best in the world,” he added.

While work progresses on setting up such a system for the provinces along the Andaman coast, the PPHO has applied to the Cabinet for 25 million baht to upgrade its DMAT mobile hospital and other medical equipment used in providing mobile emergency medical aid, Dr Wiwat said.

“I am in close contact with the Adviser to the Deputy Prime Minister, Wuttipong Chaisang. I was informed that the budget request will be presented to the Cabinet on May 11,” Dr Wiwat added.

Live Wire: Google Street View has Phuket all mapped out