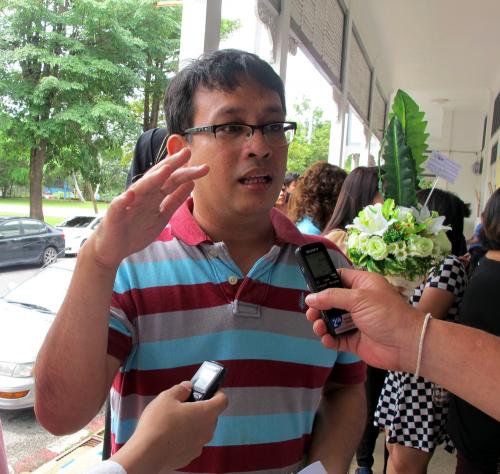 PHUKET: Mobile phone operators from Phuket’s major shopping malls protested this morning at Phuket Provincial Hall over what they see as an over-zealous interpretation of consumer protection laws.

“The officers said the arrests were made because the mobile phone cases were ‘label-controlled goods’, and those being sold were not labelled. This they said was a violation of the Consumer Protection Act BE 2522 section 30, 31 and 52,” said Mr Thawatchai.

“Both of the vendors were charged for not labelling controlled goods,” he added.

The arrests have caused considerable anxiety among the community of vendors, as vendors don’t know what to do, or have any idea of when the officers will strike again, said Taewitcho Hirun, another mobile-phone shop operator in Big C.

“We think the Office of the Consumer Protection Board (OCPB) in Bangkok should warn us before they starting taking such drastic action. We had no idea that this was even an issue,” said Mr Taewitcho.

“Mobile phone cases are not a harmful product, and we did not know until now that they are a label-controlled good.

“We are simply vendors; we do not import the cases ourselves. We really hope the governor understands our predicament and helps us, or suggests what we can do to avoid all this trouble,” Mr Taewitcho said.

Jaidao Thunthawarak, a mobile-phone operator in Big C, said that the operators want Governor Maitri to contact the OCPB and request the OCPB at least send warning letters to them as a first step. He also asked that officers be sent out to explain to vendors what can be done to overcome the problem.

“Additionally, we want the OCPB to not make any arrests for the next three months. This will allow us time to address and fix the problem,” said Ms Jaidao.