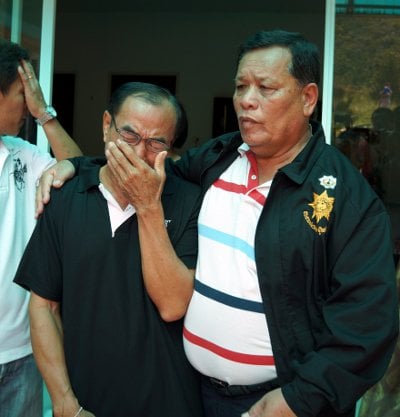 PHUKET: There was a wild scene in a normally quiet Phuket suburb this morning, where more than 60 security officers were needed to prevent an irate crowd from lynching the man who murdered 17-year-old Sunisa “Nong Som” Saiyoy on Tuesday.

Confessed killer Kittikhun Wonghajak arrived at the home of the late Nong Som at 10am today under the protection of Phuket Provincial Police, Chalong District Police and members of the Nakok Village Security Team to stage a reenactment of his crimes.

When they arrived, hundreds of people who had gathered outside the house shouted and swore at Kittikhun,with many trying to attack him.

Due to obvious security concerns, police decided not to go through with an original plan to reenact Kittikhun’s arrival at the home by motorcycle. As soon as he stepped out of the police truck, he was taken directly inside the home behind a phalanx of security officers for his own protection.

Nong Som’s grandmother Prayoon Hirio said she would be happy to let the angry mob inside the home to take revenge against Kittikhun, “even if the house collapses as a result”.

Once inside, Nong Som’s relatives continually swore and tried to attack him, only to be held back by the security team throughout the reenactment, which took about one hour.

Once inside, Kittikhun expressed remorse for the murder and begged the crowd for leniency.

“Let the criminal justice system judge me. Please don’t hurt me anymore,” said Mr Kittikhun, who was high on crystal meth and ya bah when he broke into the home four days earlier.

As for the case against him, Chalong Police Superintendent Sirisak Wasasiri said, “We are now awaiting autopsy results from the Institute of Forensic Medicine at Police General Hospital in Bangkok. Normally it takes up to 45 days, but we will ask them to send the report as soon as possible.”

“The suspect has been charged with robbery resulting in the death of the victim, which is a capital crime. He is also charged with sexual assault.

“This crime took place in broad daylight. Images from CCTV installed in the village were very useful in helping us capture the suspect shortly after the crime took place,” added Col Sirisak.

Also useful was the fact that the drug-addicted Kittikhun lived a stone’s throw away from the largest police complex in the province. He also lacked the common sense by keeping stolen items in his rented flat. He was even wearing the same shoes used in the attack when police came to his door to question him on an unrelated theft charge.

Col Sirisak used the opportunity to urge one and all to install CCTV cameras.

“They can protect you as well as your neighbors,” he said.

The staging of police reenactments for high-profile, heinous crimes remains a controversial issue. Police in Thailand claim they are necessary to help build up evidence in cases against suspects.

“Even though we had a problem completing the reenactment today, we are satisfied. We got what was required,” he said.

There was one injury reported during the stand off between police and the angry mob.

Sen Sgt Maj Boonlerd Pueakphong of the Chalong Police Officer was mistakenly attacked by the angry villagers as he helped escorted Mr Kittikhun back to the police truck.

He happened to be wearing the same color shirt as Kittikhun.

He suffered a fractured index finger on his right hand and was sent to Phuket International Hospital for treatment.