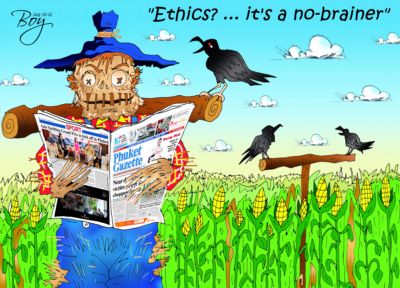 PHUKET: One memorable scene from the 1939 classic The Wizard of Oz is the moment when Toto pulls back the curtain to reveal that the “mighty and all-powerful Oz” is no more than an ordinary man who, by circumstances beyond his control, finds himself thrust into a position of power that he never sought or wanted.

This revelation may come as an unwanted plot twist by young viewers, but for some of us in the media the situation in which the “Wizard” finds himself holds some striking parallels to our own work.

Few industries have been more transformed by digital information, social networking and other advances in communication technology than the media. While blogs, readers’ forums and other new avenues of expression have changed the way information can be propagated, new levels of “information literacy” are needed to separate the digital wheat from the chaff.

Information consumers who fail to understand this are the first to be preyed upon by conspiracists, spammers, phishers, charlatans and other opportunists of similar ilk.

With all this in mind, representatives of the Phuket Gazette editorial team recently visited Provincial Hall for an official reminder of the importance of our respective roles in how Phuket is perceived abroad. Other media ‘outlets’ were also in attendance.

To mark the occasion, the Gazette would like to state for the record our ongoing commitment both to Phuket and to a high standard of journalistic ethics.

No other English-language media organization is more heavily invested in Phuket. As a fully-licensed newspaper with national hard-copy distribution, and a full-time staff of 54, we are proud of the positive role we have played in the island’s development since our establishment 20 years ago. We have prospered, but we feel we have also given back at least our fair share to the community in terms of sponsorship of almost all of the island’s important events, and in raising and donating significant sums of money for charitable causes.

In short, the Gazette has little to gain, and much to lose, by presenting the island as riddled with problems, or by sensationalizing stories so as to attract readers at the expense of the Phuket’s image.

Unlike blogs and other ‘new media’ disseminating “News” in Thailand, the mainstream media here – newspapers, magazines and television – all require licensed editors who are qualified and who personally ‘sign on the dotted line’ to take responsibility for their ethics and practices. The Gazette is proud to confirm that not one of our editors has ever been called to task by any government office for a breach of ethics (or violation of law).

And we are equally proud of our record in not shying away from crime or high-risk stories, and of presenting the news as accurately as possible. When big stories happen and speed (glory) and accuracy (professionalism) enter the fray, we do not allow the former to trump the latter.

Nor do we ‘grandstand’ by injecting our opinions into news stories or the readers comments section below those stories. Other than in our editorial pages or opinion pieces expressly labeled as such, we reserve formation and expression of opinion for our readers.

Unlike the Wizard of Oz, we recognize the futility of trying to build impressions of moral superiority through grandiose assertions about our journalistic ethics. We prefer to let our record do the marketing in that regard.

Phuket Opinion: A caveat for Toh Seh Hill, and a hint for politicians

Phuket Opinion: Beach warnings drowned out, but there’s hope in the sky