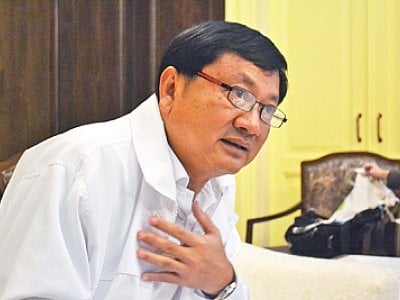 PHUKET: Department of Foreign Trade (DFT) officials have proposed building an office in Phuket as part of a government strategy to improve services for businesses ahead of the 2015 ASEAN Economic Community (AEC).

The officials were in Phuket recently to discuss the issue with Phuket Governor Tri Augkaradacha, who expressed interest in the proposal.

Phuket is one of seven provinces being considered for new foreign trade offices.

“We would like to study the suitability of setting up offices in provinces with high trade volumes. We think that expanding our services will be beneficial for the upcoming AEC,” said Khemathat Archawathamorong, a DFT trade officer.

Department of Foreign Trade Regional Coordination Center Director Sanan Charnsitpisarn said that the main service provided by such an office would be to issue documentation, such as certificates of origin, required for importing and exporting goods.

We feel we need to set up more offices in areas that have opportunities to increase trade among neighboring and distant countries,” Mr Sanan said.

Highlighting Phuket’s relevance, Mr Sanan said that the combined gross value of imports and exports for Phuket was about 1.7 billion baht per month. That figure is expected to gradually increase, he said.

Having an office in Phuket would help reduce the workload at the Songkhla office, he added. However, the Department of Foreign Trade does not yet have a budget to construct such an office, Mr Sanan said.

“We still do not know where we would set up an office in Phuket, but we would like to make it happen before 2015.

We’ll compile the results of our studies in each province and present them to the director general for consideration,” he said. Gov Tri was supportive of the idea.

“It would be a very good thing to have a foreign trade office here, and we are delighted to help,” he expressed. “It would be convenient for business operators in Phuket and nearby provinces,” he added

The bulk of Phuket’s exports is rubber and seafood products, while imports include boats and related materials, and electronic appliances, Gov Tri said.

“However, the obstacle is at the Deep Sea Port where rubber products are shipped. There is no warehouse for stocking goods, let alone the cranes needed to lift them.

He is also concerned about the threats the ASEAN Economic Community poses on small to medium-sized enterprises in Phuket. “We cannot compete with foreigners in terms of capital and know-how,” Gov Tri warned.

Phuket man murdered within inches of his wife