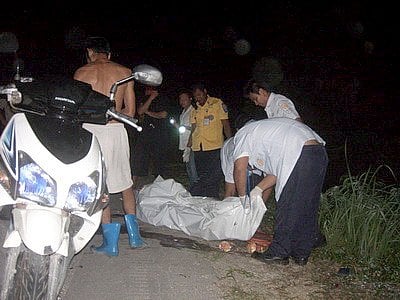 PHUKET: A man driving his wife home from her job at Phuket Airport was gunned down in Sakoo subdistrict last night.

Thachatchai Police were notified of the murder on the Sakoo-Nai Yang Road just after midnight.

They identified the deceased as 29-year-old Niphon Thaiprasert, a resident of Sakoo Village 3.

Mr Niphon died from a single gun shot that entered his skull under his right ear and exited near the left eyebrow. The caliber of the bullet has yet to be determined.

Saiyut Khongkraphan, Mr Niphon’s 28-year-old wife, was riding pillion on his motorcycle at the time of the shooting.

She told police her husband picked her up as normal after she finished her shift at the airport at about 10pm.

However, as they drove home they were trailed by another motorbike.

When Mr Niphon turned to see who was following them, the man pulled out a gun and shot him once in the head before driving off.

Thachatchai Police are in the initial stages of the investigation and have not yet mentioned possible motives.

Phuket may get a trade office