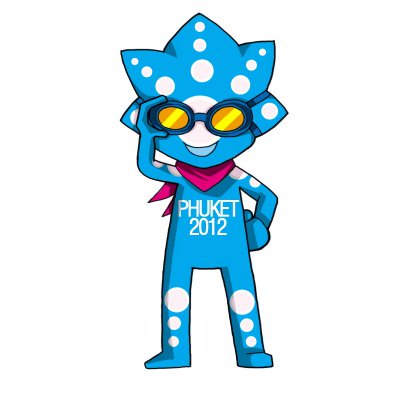 PHUKET: The Sports Authority of Thailand (SAT) Phuket office has unveiled its official mascot for the 28th Thailand Youth Games, to be hosted in Phuket from March 18-28 next year.

SAT Phuket Office Director Wirat Patee told the Phuket Gazette that the mascot, which has yet to be named, was chosen on Monday.

The mascot has a blue body, human but of indeterminate gender, with a starfish-shaped head.

The figure sports swimming goggles and a pink scarf – and nothing else except white circles on its body.

The blue represents Phuket Province, while a starfish was chosen as a resilient marine animal that can live in tough environments and is not eaten by humans – a fitting figure to lead Phuket athletes throughout the games, Director Wirat explained.

The white circles, in groups of three and of differing sizes, represent the three districts in Phuket.

The circles are white to represent Phuket’s reputation as the “Pearl of Andaman”.

The tinted swim goggles highlight that the games will be held during Phuket’s “bright and cheerful summer” season, while the pink scarf is a sign of health, Mr Wirat added.

The figure has the right hand raised as if it’s looking for something.

Chief Wiraphong said the mascot was created by Boon Ruengjaruwatana, a former student at Phuket Wittayalai School. Ms Boon joined Chulalongkorn University as a freshman in architecture last year and moved to Shanghai this year to continue her studies, he added.

The mascot will be publicly unveiled at the closing ceremony of the 27th Thailand Youth Games in Uttaradit province on March 31.

After the Uttaradit games close, a list of possible names for the mascot will be drawn up and people will be able to vote on their preferred name during public road shows to be held across the island.

“We will show the mascot at schools, shopping centers and other places with lots of people, and let people and students help us by voting for their favorite name,” said Mr Wiraphong.

Mystery body might be from Phi Phi: Phuket police