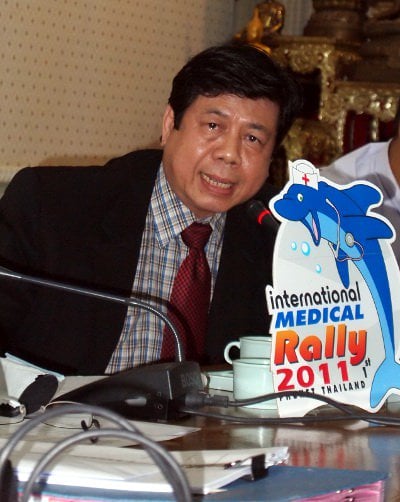 PHUKET: Phuket has the highest incidence of HIV/AIDS in Southern Thailand and the third-highest per-capita rate of infection in the country, Phuket Public Health Office Chief Sak Tanchaikul announced today.

“This year the slogan is ‘Getting to Zero’,” said Dr Sak.

He pointed out that the top 10 provinces in Thailand for contracting the disease were, respectively, Phayao, Chanthaburi, Phuket, Samut Prakarn, Kanjanaburi, Singburi, Ranong, Srisaket, Ayudhaya and Bangkok.

“The Health Office and other government departments are holding activities to educate people about AIDS and other sex-communicable diseases – and about condom usage,” said Dr Sak.

Officials conducted public-awareness activities at three popular locations in and around Phuket Town, he said, specifically at the Kaset Market behind the Robinson department store, at Super Cheap on Thepkrasattri Road in Rassada, and at the Big C shopping center on the bypass road.

“Today and tomorrow Patong Municipality are holding activities on Soi Bangla, at the Jungceylon shopping complex and other places around the island. They will be handing out condoms and leaflets to educate people – Thais and foreigners – so they realize how important safe sex is,” said Dr Sak.

The health chief pointed out that, at least according to statistics, the incidence of AIDS was on the decline in Phuket, though he added that the most at-risk group were people 25 to 39 years old.

“According to a report compiled from data from government and private agencies, from 1989 to November 30 this year 7,393 people in Phuket have been reported as having HIV.

Most of them are laborers, homeworkers, vendors, fishermen or unemployed, he added.

Phuket “floating corpse’ to be buried if unclaimed