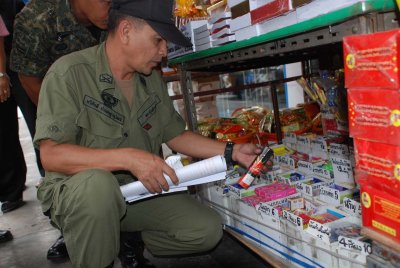 Maj Gen Choti told the Phuket Gazette that he was only too aware that the island attracted large numbers of tourists, both Thai and foreign during the festival, and their safety needed to be ensured.

Gen Choti said that the authorities were concerned about the misuse of pyrotechnics, particularly the throwing of firecrackers by overzealous spectators, as well as vendors selling dangerous pyrotechnics.

“I have ordered officers to check shops in their areas of responsibility, and identify those which are selling dangerous types of firecrackers.”

“If we find any vendors selling dangerous fireworks, we will issue them a warning. If they persist we’ll press charges against them,” he said.

Gen Choti pointed out that security had already been stepped up at the Tah Chat Chai vehicle checkpoint.

“Those measures will be further enhanced during the festival with checks made on every vehicle and every person coming to the island,” he said.

“In case any incidents occur, we will be able to restrain the criminal before they flee the area,” Gen Choti added.

Sek Loso to play in Phuket