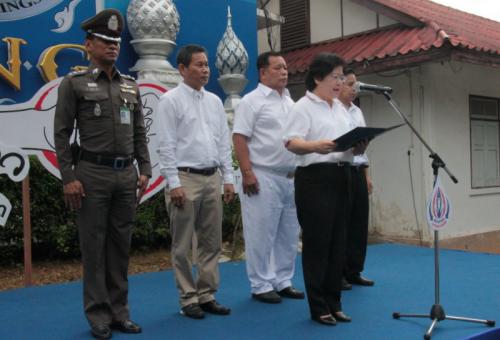 PHUKET: Phuket top officials yesterday marked the International Day against Drug Abuse with a mass swearing off drugs and a vow to eliminate drugs in Thailand before the Asean Economic Community (AEC) trade regulations come into effect in 2015.

On stage at the Phuket City District Office, Phuket Vice Governor Sommai Prijasilpa read out a national message from Prime Minister Yingluck Shinawatra, in which the Thai premier pledged to continue the fight against drugs.

“We stress the need for villages and communities to be involved, since they have the power to solve the drug problem by themselves,” Vice Governor Sommai read.

“Moreover, Thailand will join the Asean community in 2015. The government will push for improved relations with neighboring countries and work toward greater cooperation with many other countries in drug suppression and the treatment of drug addiction,” she added.