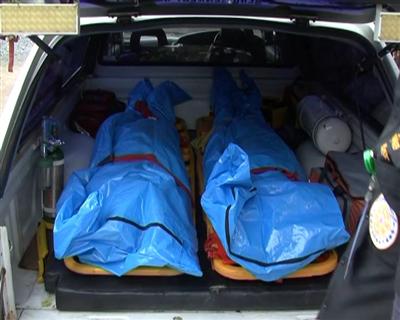 PHUKET: A Phuket motorbike taxi driver shot his wife while she was sleeping and then turned the gun on himself this morning – all while the couple’s two children were sitting in the next room.

Thung Thong Police led by Superintendent Kraithong Junthongbai were notified of the tragedy at 8:30am.

At the scene, a home in the Ketho residential estate, off Wichit Songkram Road in Kathu, police found the body of 37-year-old Winanthana Phutawach lying face up on a floor mattress.

She died instantly of a single bullet wound to the center of the skull that entered under her chin.

Lying next to her corpse on a comforter was the body of her husband, 44-year-old motorcycle taxi driver Soonthorn Thepsut.

Witnesses said Mr Soonthorn shot his wife in her sleep before turning the Thai-style homemade pistol on himself.

He died of a single bullet wound that entered through his right ear and exited through the left.

A politely-worded suicide note left behind by Mr Soonthorn asked his parents and friends for forgiveness.

He had tried every way possible way to resolve his problem and was left with no other option, it read.

The letter, dated March 26, asked relatives to take care of the two children, an 11-year old boy and his sister, age 10.

Police believe the murder was motivated by romantic jealousy.

Mr Soonthorn was suspicious that his wife was having an affair with a guest at a nearby country club, where she worked as a caddy.

He spied on her and they fought often, witnesses said.

Mr Soonthorn, a native of Nakhon Sri Thammarat, worked as a motorbike taxi driver at the bus station on Phang Nga Road in Phuket Town.

Miss Winanthana, originally from the northeastern province of Surin, was also listed as a resident of Nakhon Sri Thammarat.

The couple lived together for over a decade before Mr Soonthorn took both their lives.

The tragedy was the first murder-suicide reported in Phuket this year, and follows the bizarre shooting murder of a restaurant cashier in Rassada in November last year.

Relatives of both the deceased in today’s tragedy have declined a police offer to investigate the circumstances leading to the deaths.