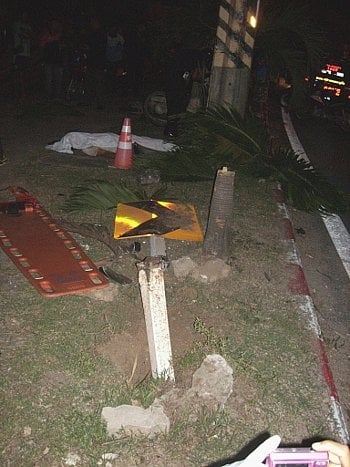 PHUKET: A road sign intended to save lives became an instrument of death last night when a Phuket motorcycle rider crashed into it at high speed and was killed instantly.

Thalang Police were informed of the death at 10:20pm.

Arriving at the scene, on the southbound lane of Thepkrasattri Road near the Tha Reua Chinese Shrine, police found the body of a man with massive head trauma and an apparent broken neck.

Nearby the body was a badly damaged Honda Dream motorcycle.

A search of the body recovered a driver’s license.

Police identified the deceased as 49-year-old Naree Chaihom, a resident of Montri Road in Phuket Town.

Not far from the body police found a bright yellow road sign snapped in half. A palm tree at roadside met a similar fate.

The road sign was one in a series erected there to warn drivers of the dangerous curve.

There are no known witnesses to the crash, but police assume Mr Naree entered the curve at high speed, lost control of the bike and died instantly from the force of the impact with the sign.

He was not wearing a helmet.

When their efforts failed they transported the body to Thalang Hospital for examination and storage until claimed by relatives.

The site of the accident, just south of the Heroines’ Monument, was the same where one man was killed and three badly injured when their utility truck crashed on June 16.