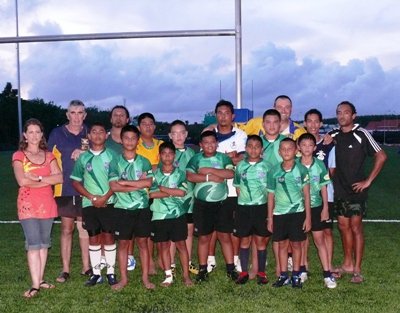 PHUKET: Youth rugby shone on the international stage recently when the Phuket Lomas took on teams from around the world and reached the final of Touraid’s UK tournament held in Manchester.

The Lomas lived with appointed host families and during their stay they enjoyed academic and leisure activities at Wright Robinson Sports College and met with celebrities such as Chester Williams, the South African rugby world cup winner.

Soaking up a bit of culture was of course a great experience for the touring party, but the Lomas had come to England to play rugby.

And play they did. After three days of anticipation the Lomas arrived at Eastlands Stadium like Derby winners under starter’s orders, eager to get on the pitch and test their skills honed in the heat of Thailand.

Eight teams were divided into two groups of four with the Lomas drawn in Group B. Creative Technical Academy were first to challenge the boys from Phuket in typical British summer conditions – cold and wet.

Napat (Book) Supreechawutti-pong and Sirirat (Fai) Tipjarune lead the Lomas charge with superb support play from Songwoot (Night) Intanon and Sombat (Nick) Phoenhiran. At the final whistle, two first half tries from Sirirat and a second half score by Napat helped the Lomas secure their first international victory.

With nerves settled and their engine running well, the Lomas moved up a gear against an East Midlands team who had lost their first game against Trinidad and Tobago, conceding five tries to the Caribbean side.

Sirirat and Napat again showed their hunger for crossing the try line with Sirirat adding four more tries to his tournament tally and Napat boosting his with two more scores. Sombat ended the game as a contest with a brilliant individual effort before East Midlands showed their spirit to score in the last minute. A 7-1 result moved the Lomas into their last group game against Trinidad and Tobago.

This game would decide who would meet the Kulcutu Institute of Sport from India in the final, but the Lomas were faced with a much larger and stronger side than they had ever encountered.

It was going to be a bruising battle and the Trinidad and Tobago team used their strength and size to batter the Lomas line. Siwakorn (Meeh) Settha set the standard with a try saving tackle that proved inspirational to Phuket’s defense.

Banthoon (Pluem) Homruen followed Siwakorn’s example and put his body in harms way to save a certain score. But it was a costly sacrifice. The heroic tackle caused an injury to Banthoon’s arm which forced him to leave the field, his tournament over.

Trinidad and Tobago’s focus was lost after the restart and the Lomas made for their opponents line. With his pack driving from behind, Napat was pushed over for the opening score, late in the second half. The Caribbean boys threw everything they had at the nine-man Lomas, but Phuket’s disciplined defense held firm.

With only two minutes remaining, Lomas turned-over possession and fed the ball to their captain Nanthawat who raced away to touch down and seal their place in the final.

Getting to the final proved that bridge too far for the Lomas. A man down and others battle-scarred provided a well drilled Kulcutu side opportunities not usually afforded by the Phuket lads. The Lomas spirit was not dampened and their Herculean effort was acknowledged and appreciated by spectators and players alike, but in the end Kulcutu ran in four tries to take the title.