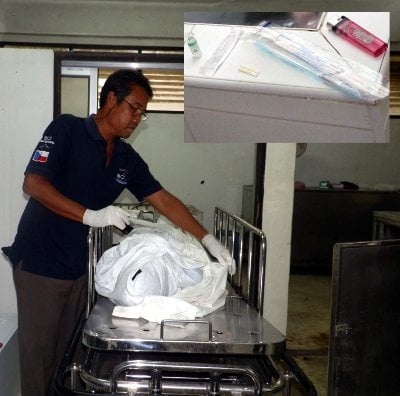 PHUKET: A Phuket man died of an apparent heroin overdose in a gas station bathroom in Thalang yesterday.

Arriving at the station with Phuket Kusoldharm Foundation workers, police found the body of a man slumped over in the middle of three stalls, his head beneath the surface of the water in the cistern and one knee in the squat-style toilet.

The deceased was wearing a blue polo shirt and a pair of blue jeans, which were pulled down to his hips.

The body was identified by a Thai motorcycle driver’s license as that of Kittipoom Rattapon, 35, a resident of Thepkrasattri Village 3.

Police believe Mr Kittipoom died about four hours before his body was found.

Atop the rim of the ceramic-tiled cistern, police collected as evidence two plastic straws containing heroin, a disposable syringe, a lighter, a glass vial and a Mitsubishi car key.

In the parking lot was Mr Kittipoom’s Phuket-registered Mitsubishi Lancer.

As there was no evidence of foul play, police believe Mr Kittipoom died of a self-administered overdose of heroin.

Phuket Kusoldharm Foundation workers took his body to Thalang Hospital for further examination and storage until it is claimed by relatives.