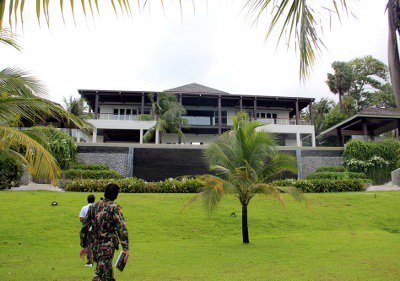 PHUKET: A French businessman will have to suffer his 100-million-baht luxury villa in Phuket being demolished if the land it is on is ruled to be encroaching on national park land.

The new chief of Sirinath National Park, Cheewapap Cheewatham, filed a complaint with police after a surprise raid on the property on Sunday.

The raid was led by Sermyos Somman, director of the Chiang Mai office of the Royal Forest Department. Mr Sermyos explained that he first noticed the luxury villa when he came to Phuket to inspect land documents related to the investigation of Trisara resort.

Suspecting that the home, sitting atop a small hill, may be encroaching on the neighboring national park, Mr Sermyos lead a small team of officers to the house and asked the Thai staff present for permission to search the premises.

The officers found that the large, two-storey house, complete with its own swimming pool and tennis court, offers a panoramic view of the ocean from its seven rai of land.

“The Thai staff informed me that the house belongs to a French businessman. He is currently away on a business trip to Hong Kong,” said Mr Sermyos.

“As we were unable to ask the owner to provide the land title for the property, we asked the Land Office instead, who informed us that the current registered owner is a Mr Bernard Gautier,” explained Mr Sermyos.

“He bought the property for 100 million baht. However, as Mr Bernard is not the original builder of the house, which violates zoning laws by being on park land, Mr Bernard is not liable for prosecution,” he said.

“However, his home may be pulled down if the court rules that the house was built illegally [on state land],” Mr Sermyos warned.

“The original application to build the luxury estate was submitted in 1984, but Sirinath was established as a national park in 1981, three years before the application was granted. If this land is found to be on national park land, we will demolish the building,” he added.

Soonthorn Watcharakuldilok, adviser to the Department of National Parks, Wildlife and Plant Conservation (DNP) director-general, told the Phuket Gazette that the DNP had so far filed complaints to Tah Chat Chai Police against the owners of three of the resorts raided on August 15.

The complaint was lodged against the owner of a billion-baht resort built on nine rai of land, he explained.

It was not reported, however, exactly how much of that nine rai is believed to be encroaching on park land.

“So far, we have filed complaints against the owners of four properties [including Mr Gautier]. We will investigate later which government officials issued the land title documents for these properties. Once we know, we will file police reports against everyone involved in this,” said Mr Cheewapap.

“We are still investigating the seven other plots of land [raided on August 15], but we need to be very careful.

“The current owners of the land have presented documents to us that they claim to be legally issued by the Land Office. Even though they have the documents to prove ownership, I will have to check and confirm that those documents are all valid,” Mr Cheewapap said.