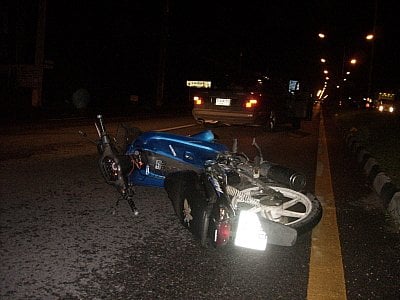 PHUKET: Police are awaiting test results to confirm whether alcohol was a factor in a fatal traffic accident this morning involving a luggage-transport truck and a motorbike.

Thalang Police responded to reports of the crash in Srisoonthorn Subdistrict – about 300 meters north of the Heroines’ Monument – shortly after 1am.

At the scene was a bronze-colored Isuzu D-Max pickup parked on the side of the southbound lane of Thepkrasattri Road with a smashed front end. In the middle of the road was a blue Honda Wave motorcycle. Nearby was the body of a yet-unidentified male.

According to witnesses, there was no helmet found at the site.

A search failed to recover any personal items or proof of identity on the body, which was transported to Thalang Hospital by Kusoldharm Rescue Foundation workers.

A hospital official told the Phuket Gazette that they are waiting for family members to identify and claim the body.

Mr Wannawut was driving in the southbound lane when he noticed a motorcycle parked ahead at the side of the road. Suddenly a man jumped on the bike, started it up and zoomed right out in front of his truck without looking, Lt Thannakit said.

During police questioning, two hostesses at a nearby karaoke bar confirmed Mr Wannawut’s account of the incident and said that the victim had been at the karaoke bar prior to the accident.

Both Mr Wannawut and the motorcycle driver were blood-tested for alcohol. Although the results are pending, police suspect that Mr Wannawut was not intoxicated due to his mannerisms during questioning, Lt Thannakit said.